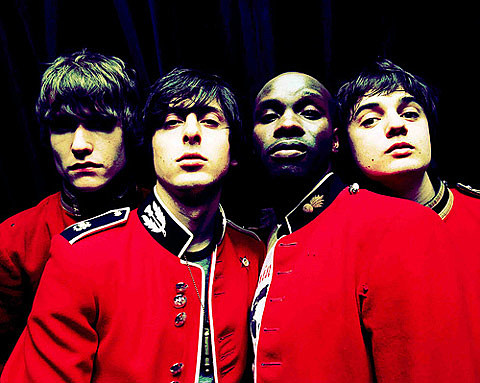 Early '00s UK group The Libertines are getting back together for a big outdoor show in London on July 5, as part of the Barclaycard British Summer Time concerts. The band reformed for Reading and Leeds festivals in 2010, but this is the only other time since breaking up in 2004.

While never big in America, it's a big deal in England: The Libertines burned hot and bright, releasing their acclaimed debut Up the Bracket in 2002 which inspired a whole lot of other UK bands in the middle of last decade. It didn't last. The band's shambolic nature and blood-brother-spirit of Peter Doherty and Carl Barât was part of the appeal, but Doherty's drug troubles (every kind of drug, basically) became almost daily fodder for British tabloids.

The band (who played without Doherty near the end) broke up shortly after the eponymous sophomore album in 2004 (which went to #1 in the UK). Carl Barât formed Dirty Pretty Things, and Doherty formed Babyshambles. Doherty also released a great solo single with Wolfman called "For Lovers". Barât's new band, The Jackals, are expected to release their debut album this year.

North American shows seem unlikely as they never caught on much beyond NME-reading Anglophiles at the time. The Libertines only toured the US once with Doherty in Spring 2003 -- anybody go to their infamous show at Luxx (now the Trash Bar) in Williamsburg? -- which included an appearance on Letterman. But you never know.

Some Libertines streams and videos footage below...

The Libertines - Can't Stand Me Now

The Libertines - Don't Look Back Into The Sun

The Libertines - Up The Bracket

The Libertines - Can't Stand Me Now (on Jonathan Ross)

The Libertines - Can't Stand Me Now (on Letterman)