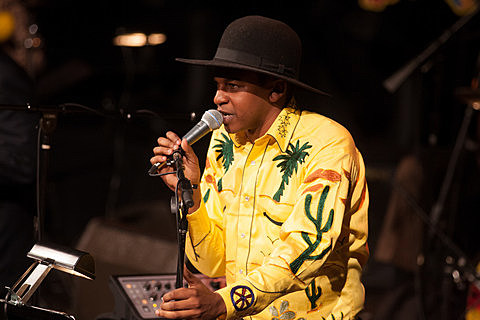 It's finally summer which means there's no lack of free outdoor live music in NYC, and here's yet another option. The Lot in Long Island City is a free, all ages music & film series running from August 2 - September 20 at 43-15 Crescent Street with music every Saturday from 3-9 PM and film every Thursday from 6-10 PM. The music lineup includes shows from Sinkane, Small Black, Kevin Morby, Hollis Brown, Jonny Fritz (formerly Jonny Corndawg), Widowspeak, Alex Bleeker & the Freaks, The Sugarman 3, Naomi Shelton & the Gospel Queens, and more. Full schedule below.

Sinkane, who's due for a new album, also has a fall tour with Helado Negro coming up that includes a NYC show happening October 5 at Baby's All Right. Tickets for that show are on sale now. After the tour, he plays another NYC show on November 2 at SOB's. No other artists billed for that show yet. Tickets are on sale. All of his dates are listed below.

Sinkane's Long Island City show is with Blue Note-signed jazz musician Takuya Kuroda, who among other things has collaborated with Jose James. Takuya also plays a Brooklyn show at Glasslands on July 26 with Gabriel Garzón Montano. Tickets for that show are on sale now. Watch a video of him below.

Speaking of all-day Saturday music series in Long Island City, Warm Up at MoMA PS1 kicked off this past weekend (6/28) and continues this coming weekend (7/5) through September 6. As we mentioned, to get to LIC from July 25 through September, you can't use the G (which will be stopping at Nassau), but there will be a bus shuttle service between Nassau and Court Sq, and you can still take the 7 or E.

The Lot in Long Island City schedule, with the list of Sinkane dates and Takuya Kuroda video, below...