The Low Anthem at MHOW in 2011 (more by Toby Tenenbaum) 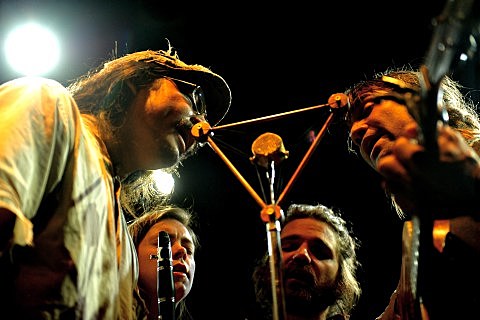 Indie folk collective The Low Anthem have announced they'll go on a short tour with the falsetto-fueled Death Vessel and Last Good Tooth this July. The tour kicks off in Brooklyn at Gowanus art gallery Ray Smith Studio on July 10 (261 Bond St). That's a pretty small venue for a band who headlined Bowery Ballroom and MHOW just three years ago. All dates on the tour are listed below.

UPDATE: Despite the initial announcement saying the NYC show was at Sunny's Bar (which reopened in August after damage from Hurricane Sandy), it's actually at Ray Smith Studio.

Death Vessel will also be back later in the year when his tour with Mirah hits LPR on October 11. Tickets for that show are still available.

Watch some Low Anthem and Death Vessel videos, with the list of dates, below...