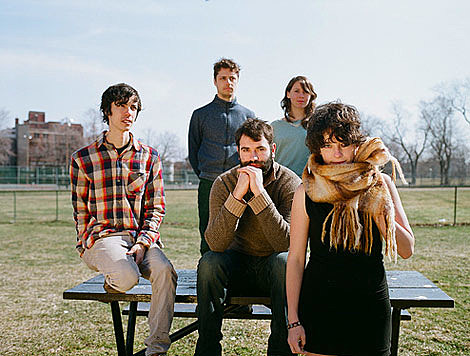 The other highlight for me Thursday night was getting to see The Luyas who are really unlike anything else going right now. They almost defy easy description. The closest I came up with was "Joanna Newsom fronting Mercury Rev" which at least gets you near the right ballpark. Singer (and member of Miracle Fortress when Graham isn't playing solo) Jessie Stein's voice has a child-like quality to it, and the band can go from intimate to epic and joyous within a song. There's unusual instrumentation too -- Pietro Amato's french horn is integral to their sound, and Stein is the only person other than the Liars' Aaron Hemphill that I've seen play a Moodswinger. All these disparate elements shouldn't work together, but they do... and gorgeously. The Luya's 2007 debut, Faker Death, is good but the new material they played last night was even better. The band's new album is due in early 2010 and could be a real stunner.

That quote was from when I saw The Luyas at M for Montreal last October. Finally, New York is getting its first chance to see then, this week, with four shows: Wednesday, April 21 in a loft (a "secret show"); Thursday, April 22 at Webster Hall opening for Owen Pallett; Friday, April 23 at the Sycamore; and Sunday, April 25 at Glasslands which also has fellow Montreal band Parlovr, who just finished a tour with We Are Wolves, on the bill (who are excellent in their own right).

While they haven't set a date for their new album, The Luyas' second album is finished and will be out hopefully sooner than later. Check out "Tiny Head" from it above and you can also hear new tracks "Canary" and "Moodslayer" via their MySpace. You can also check out an extended Take Away Session at the bottom of this post (filmed around the band's most recent Pop Montreal appearance), along with all upcoming tour dates. They really are something special live, so you might want to make room on your schedule this week to see them...