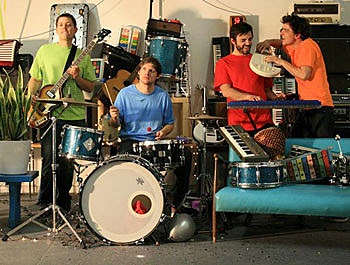 'db' had a good point when he/she said, "Two days in a row you neglect The Mae Shi! :) They're at Silent Barn tonight with Meneguar." Hopefully this post makes up for it, and the fact that they're playing Union Pool on Saturday should make up for the fact that I posted the below tour dates after their Cake Shop show (which was last night).

Los Angeles based art-thrash band The Mae Shi begins their first tour in two years on Monday, July 30, 2007. It is their first full tour with new singer/keyboardist/multi-instrumentalist Jon Gray. They are supporting their new full-length album, "HLLLYH," which will be released digitally and on CD by Moshi Moshi Records in November 2007 but will be available in cassette format on tour.

New songs at their MySpace. Old songs above. All tour dates below...