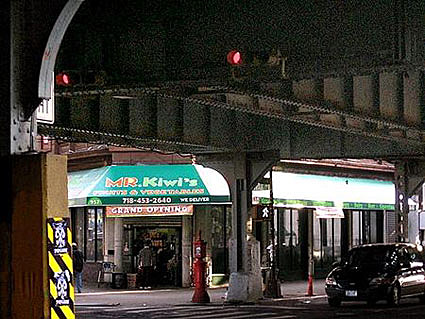 great show / party this weekend, 1st show ever @ a great new loft space - the MARKET HOTEL. Amazing 2nd floor space in an ancient cast iron facade building, formerly a Dominican speakeasy from the late 70's. Very Scarface, all iron columns and red shag and different rooms. Right on the corner of Myrtle & Broadway, next to the Myrtle JMZ station.

-- NOTE --> The Market Hotel is 8 great kids' home. They're nice enough to let these great shows happen in their house, PLS BE NICE!

PLS - DON'T HANG OUT / DRINK ON THE SIDEWALK OUT FRONT!

[ SIAN ALICE GROUP ]
"Sian Alice Group, newly arrived from the UK to play a string of US dates. Their debut album 59.59 is out in a couple of weeks and is a real stunner. Pitchfork has had this to say about them: "the word 'epic' is thrown around quite a bit, and with good reason. The band, which uses Arthur Russel, Detroit techno and a little shoegaze as jump-offs, knows how to fill the space between these disparate elements." Live they do not dissapoint, and for the duration of their time in the US they will be playing with Mike Bones in the group." - Social Registry HQ
-- MYSPACE / MP3s --> http://myspace.com/sianalicegroup

[ ARTANKER CONVOY ]
"They'd never admit it. They probably don't realize it either. But the six members of Artanker Convoy have more in common with Medeski Martin & Wood than any band of the Brooklyn basement variety. This is not a bad thing. Like the latter's slave-to-the-rhythm jazz, Artanker's postmodern patchwork stretches tracks like taffy at a county fair without ever sounding like a noodling, comfortably numb jam band. If anything, they find an unforeseen middle ground between hipsters and hippies, an insistent groove that'd move the masses at a Rapture show or the second stage of Bonnaroo. And unlike most bands with seven-minute songs, Artanker actually sounds great when you aren't absurdly stoned. The just-released Mature Fantasy LP (The Social Registry) is a prime example of this, as it lulls the listener into a stupor with slight shades of soul, Krautrock, bossa nova, hip-hop, psych, punk funk and New York noise. Prepare to be bowled over." - Philadelphia City Paper
-- MYSPACE / MP3s --> http://myspace.com/artankerconvoy

[ MIKE BONES ]
"His debut album The Sky Behind The Sea came out late last year, and was described by Time Out New York as "a melancholy, faintly surreal singer-songwriter record: 21st century roots rock maybe? Sultry fretwork, unadorned vocals and gritty textures create a potently heady mood." Bones is amazing - writes lyrics and plays guitar like no-one else we can think of. Backing him up on Saturday will be Sian Alice Group's Rupert Clervaux, Ben Crook and Sasha Vine." - Social Registry HQ
-- MYSPACE / MP3s --> http://myspace.com/littlemikebones

[ FARMACIA ]
"We all agree here at AQ that this is a really amazing band. We also all agree that it's tough to describe! But we'll try, since we like it so much and want you know about it. Simply put (which is impossible), Farmacia from Argentina straddle the line between minimal dance music and rhythmic noise. A trio who are making their OWN original music first and foremost, not something we hear everyday. There's an experimental, home-brewed, kit-bashed approach here that possesses some of the charming weirdness of Argentine AQ faves Reynols without sounding like them... It's a sort of playful industrial/electro music, part Throbbing Gristle, part Aphex Twin, part Mouse On Mars, part Ratatat. It even reminds us of Itavayla, or Trans Am. There's bopping abstract noises, wordless vocals, distortion and drone and disco-friendly beats. Surprisingly beautiful, beautifully surprising. The three members are credited with the use of plenty of analog synths, samplers, computers... an array of ethnic flutes... eggs, noises, and "atmospheric crucial voices"... y'know, the usual stuff. And the results are, as we said, tough to describe. But we figure it's got a wide appeal, to fans of Kraftwerk and Cluster back in the '70s... to fans of Lindstrom yesterday. Totally recommended." - Aquarias Records
-- MYSPACE / MP3s --> http://myspace.com/farmacia24hs

-----important-note-----> SILENT BARN -&- DEATH BY AUDIO -&- MARKET HOTEL ARE ALL GREAT ALL AGES SPACES IN RESIDENTIAL NEIGHBORHOODS. WHILST ROCKIN', PLS RESPECT THE NEIGHBORHOOD AND THE SPACE BY NOT CONGREGATING ANYWHERE ON THE BLOCK IN FRONT OF THE SHOW AND BY NOT DRINKING ALCOHOL OUTSIDE OF THE DOORS.

IF YOU ARE UNDER 21, PLS DO NOT BRING ALCOHOL INTO THE SPACE, OR DRINK IT NEAR THE SPACE; OR AT THE VERY LEAST, PLS REMEMBER THAT UNDERAGE DRINKING IS ILLEGAL AND SHOULD BE KEPT ON THE D/L FOR THE SAKE OF THE FUTURE OF THESE RAD SHOWS & SPACES. Thx!

FYI - I'm takin it a little easy for the next few months - you won't see a lot of shows from me while I take a substantial break & work on some other projects for awhile. I'll still be around to tell you guys about great shows here & there though...

Brought to you with love by Todd P! Thanks for 7 great years!

And it's where No Age is playing on Monday.