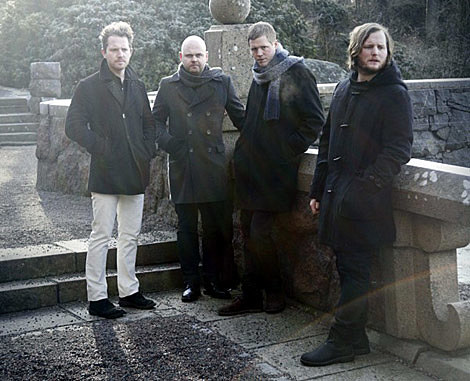 Sweden's Mary Onettes are back in the U.S. next week for a string of East Coast dates, including three dates in New York: November 4 at Union Hall, Nov. 6 at The Studio @ Webster Hall and Nov. 8 at Mercury Lounge. Next week also sees the release of their second album, Islands, which is out on Labrador Records (The Legends, Pelle Carlberg and The Radio Dept.). You can download the Island's first two singles, "Puzzles" and "Dare," at the top of this post. Where their first album went for more of a straight early-'80s, guitar-driven Cure/Bunnymen/JAMC gloomy pop vibe, Islands is much more lush, with layers of strings and keyboards added to mix. Though not synthy/dancey, Island's big choruses and plaintive vocals kind of remind me of Xymox's poppy 1989 album Twist of Shadows, which is not a bad thing at all.

I saw both of The Mary Onettes when they played here in May 2008 and was impressed by their ability to incorporate what are almost strictly '80s influences but not make it feel like someone else's nostalgia. Maybe it was the volume. They are quite loud. The Mary Onettes have some well-chosen openers for their three NYC shows, as well: Blacklist, with whom they played last year, will open at Union Hall; the dancey dreampop of Kordan for the Studio @ Webster Hall (you can download their new EP for free); and The Art of Shooting at Mercury Lounge.

The Mary Onettes also play Boston and Philly while in America. All 2009 tour dates and a video below...