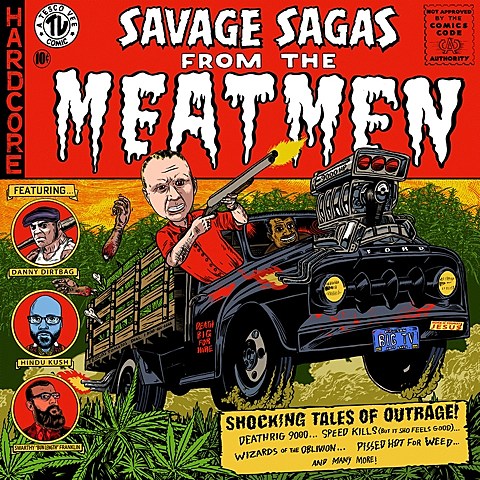 After first reuniting in 2008, Michigan hardcore legends The Meatmen returned last year with their first album of original music in 18 years, Savage Sagas, and they're still as crude and politically incorrect as ever. To quote Punk News, "On the album, frontman Tesco Vee has several songs about V.D., a few about beating people up, at least one trip to a low-rent strip club, and enough insults at people of various backgrounds that show he can't possibly be bigoted because he hates everyone." Song titles include "The Dwarves Are The Second Greatest Band In The World" (as in, after The Meatmen of course), "The Ballad of Stinky Penis," "KKK," "Speed Kills (But It Sho' Feels Good)," "Rock N Roll Enema," etc, etc, etc. You can listen to the whole thing below.

They've now announced a short tour with Against The Grain in support of the new album, running from late April through early May. The tour hits NYC on May 4 at Saint Vitus, and tickets for that one are on sale now.

All dates are listed, with the new album stream and a stream of their classic We're the Meatmen...and You Suck!, below...

all dates w/ Against the Grain