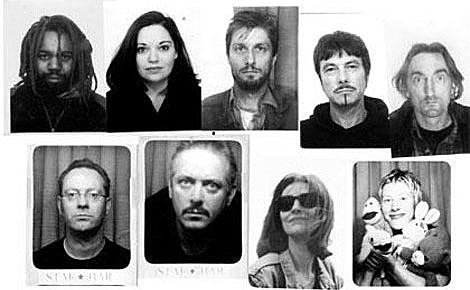 That'll be after the initial wave and excitement of punk rock. I really liked Pere Ubu at that time. I was listening to the John Peel show a lot when Mekons were on there. The Mekons were actually on the John Peel show all the time, so I used to tape it. They'd say, "Oh they're playing the song tonight on John Peel," so I'd put a cassette machine in front of my radio and press the button and go down to the pub and listen to it at two in the morning when I came home.

Bob Marley was putting out really cool stuff in 1978. The Mekons' first single came out in '78. By '79, I was really bored of what we were doing. It was around that time that Public Image was going off. Gang of Four were kind of moving in a different direction as well. There were the Raincoats and the Slits. There were also the punks that were into Anti-Nowhere League and being like heavy metal, just speeded up heavy metal with their mohicans and the leather jackets. That went one way. I thought that stuff was a load of crap. It wasn't interesting to me at all. The Mekons recorded our second LP in '79, when we were signed to Virgin. We were just sitting in a studio playing distorted pianos and nose flutes and god knows what. We wanted to be anything but three-chord British punk rock at that point. [Jon Langford of The Mekons answering "What he listened to at 20 years old"]

Jon Langford and The Mekons take their act on the road this summer, with a string of dates that include two NYC shows. Those gigs are Friday, July 31st at the Bell House and Saturday, August 1st at the Mercury Lounge. Tickets to the Bell House show (where the band will be playing "semi-acoustic") and tickets to their Merc Lounge show (listed as "electric") are both on sale now. The Horse's Ha opens both performances; Megan Reilly (whose band has included Steve Goulding, drummer for The Mekons) is also opening at the Mercury Lounge.

Earlier this year, Langford played with another one of his bands, Waco Brothers, at SXSW. Check out an interview/performance from that fest, with another Langford interview from July 2008, along with all tour dates, below...