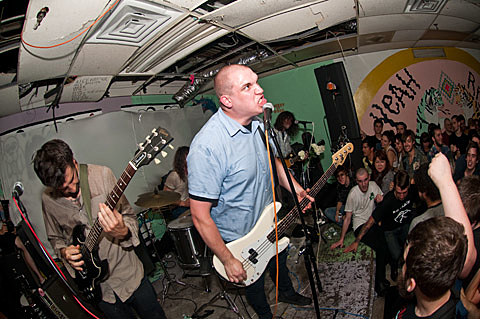 The Men are ready to show off their Leave Home material (stream it) to the rest of the US, as they kick of a tour tonight (8/4) at 538 Johnson where they team with Nomos, Brain F, and Only the Messenger for their tour kickoff. Updated tour dates are below, which include a homecoming show on 9/17 at Saint Vitus with Pygmy Shrews & Vaz.

One of their dates, August 19th, is part of the three-day Total Fest X in Missoula, Montana with an awesome list of bands that include the reunited Hammerhead, Milk Music, White Shit, Pygmy Shrews, Big Business, Helms Alee, Japanther, and many many others. Full lineup and festival details are below. Tickets are on sale.

The Men appeared on WFMU on 8/2 to perform on the Brian Turner show. Head to WFMU's archive to download the whole performance and while you're there, download The Men's Immaculada LP for free.

All tour dates, video and Total Fest X details are below.

Wantage USA and KBGA team up for Total Fest X!

Who: 45 original, independent bands from all over North America, representing everything from punk rock and metal to indie, pop and country

Advance passes on sale now at totalfest.org and at Ear Candy Music (Missoula).

This August 18-20, over 45 bands and hundreds of fans of all ages from
all over the country will descend upon our sleepy, mountain hamlet of
Missoula, Montana to celebrate the tenth annual Total Fest. A
volunteer-driven, DIY music festival, Total Fest offers up some of the
most smile producing, ear-plowing music that fans will experience all
year. To celebrate our tenth year anniversary, we've put together a
pretty volatile line-up, which will include performances by Big
Business, Hammerhead, Vaz, Helms Alee, Japanther, Shannon and the
Clams, the Arrivals, Underground Railroad to Candyland, White Mystery,
and 35 more fantastic bands from throughout the US (and a few
international ones, too).

Total Fest was started by Josh Vanek in 2001 as a showcase of bands
from his Wantage USA record label, and over the years it has featured
performances from bands such as Federation X, The Champs, Oxes,
Deranged Diction, Last of the Juanitas (pre-Red Fang) and many others.
Over the past ten years, it has grown from a one-night, single-stage
show to three days of music over multiple venues, inviting bands from
outside of the Wantage USA family to come and share their music in
Missoula with many well-known bands, some lesser-known, and a handful
of new and obscure music from around the country. Total Fest's
volunteer organizers offer-up their time, money and sanity to stage,
house and feed original and independent musicians from all over the
country. The event is nonprofit and all proceeds after fixed costs go
to the bands. This is the only event of its kind in Missoula and this
part of the Northwest/Rockies.

Total Fest is presented by Wantage USA Records and KBGA Radio, with
the support of several independent businesses from Missoula community.