The Men at 4Knots in June (more by Amanda Hatfield) 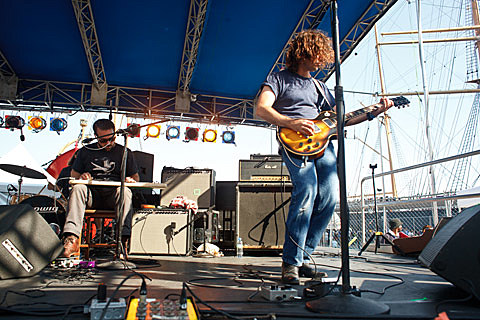 Brooklyn punks gone country jammers The Men have a few West Coast shows scheduled in early September, following their appearance at San Francisco's Outside Lands in August. After that, they'll take some time off before an October tour and then play a hometown show at Music Hall of Williamsburg on November 5 with some pretty great openers.

Support on most of the October tour and the MHOW show comes from Philly's Dino Jr-inspired Purling Hiss, who just opened for Death in NYC last week (7/1), and whose new album, Water On Mars (out now on Drag City), is one of the better sludge/rock releases of the year.

And opening the MHOW show will be loud local Brooklyn garage rockers Pampers, who have opened for The Men in NYC before, and more recently rounded out other great NYC bills, supporting Ty Segall's Fuzz, Coliseum, Gun Outfit and more. You can also catch Pampers opening for OBN IIIs and Ex-Cult when those bands' tour together hits Death by Audio on July 25 with Shocked Minds.

Tickets for the Music Hall of Williamsburg show go on sale Friday (7/12) at noon with an AmEx presale starting Wednesday (7/10) at noon. All The Men dates are listed, along with streams from all three bands, below...