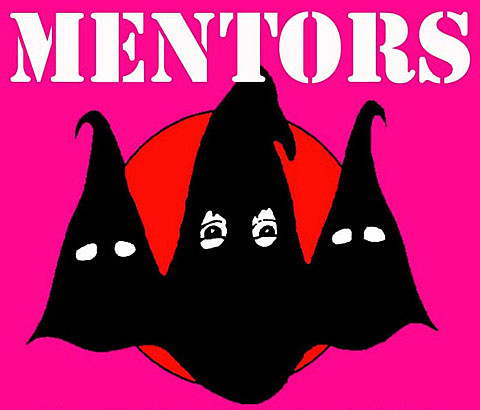 Hooded West Coast sleazeballs The Mentors will embark on a tour in July that will hit NYC on July 11 at The Paper Box. That show will be a three-stager with support coming from Maximum Oversatan, Throaat, Bomb Scare, Goat Felch and more. Full Paper Box lineup and all Mentors tour dates are listed in this post.

The Mentors' have a long and wacky history, including having their song "Golden Showers" cited in Tipper Gore's obscene lyrics senate hearings in the mid-'80s. Another moment of infamy comes from Mentors lead singer/drummer El Duce, who in the wake of Kurt Cobain's death claimed that Courtney Love had offered him $50,000 to kill Cobain. He took it even further in a clip from the documentary Kurt & Courtney, below, by saying he regrets not accepting the offer and that he knows who killed Cobain. As you probably know, the case was recently reconfirmed to be a suicide and is officially closed. El Duce, meanwhile, died in 1997 after being hit by a train, with the official cause of death being listed as "misadventure." Original members Sickie Wifebeater and Dr. Heathen Scum continued the band, now with singer/drummer Mad Dog Duce.

All dates are listed, along with full Paper Box lineup and video, below...