The State will always be near and dear to my heart. For that reason alone (not that there aren't other reasons), Michael Showalter is pretty much welcome at BrooklynVegan.com any time he feels like stopping by - even if the only reason he came over today was to promote his new CD.....Only when he needs something.....Always him, him, him.... 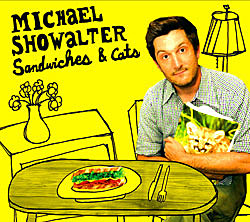 Hi guest blogging all day and I'm getting that weird typing disease where you have to wear a wrist brace. I want to say it's called Rosacea but I'm pretty sure that's not it. I've been told to introduce myself: I'm Michael Showalter (I live in Brooklyn.) I was on The State, and Stella, and Wet Hot American Summer and The Baxter. I have a comedy record out today that is called, "Sandwiches & Cats." Two of the things that I love the most. Here's a video of me recording dialogue for a song that's on the record about "how to make a sandwich." Is it weighty subject matter? That depends on who you ask. Some people take sandwiches very seriously. -Michael

Check out the video Michael is talking about, below.....

Check out all the stops on Michael's whirwind blog tour today. You'll also find him at Stereogum, EW.com, The Apiary, Jewschool, My Old Kentucky Blog, Culture Bully, Best Week Ever, and Deadspin. And see Michael in real life in a town near you....