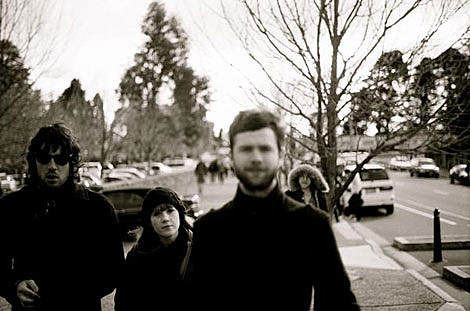 Way back in November, we mentioned that Australian band The Middle East would be making their first US appearance around SXSW 2010. Well, we can announce one of the shows on that trip (if not the first) will be the official BrooklynVegan SXSW showcase with Here We Go Magic, Califone and Serena Maneesh at Club DeVille on Wednesday, March 17th. With those four bands announced, that leaves just two more TBA (stay tuned).

The Middle East will also be at at Coachella in April. And they're on the currently-unannounced lineup for Sasquatch Fest, which is being revealed at a show tonight (2/15) in Seattle with Surfer Blood and Atlas Sound. That festival will be happening in Gorge, Washington, over Memorial Day weekend (5/29-5/31 this year). Pavement will be there. Pictures from last year are here and here. Three day passes for 2010 are on sale.

The two stellar songs above are off the Middle East's debut EP, The Recordings of the Middle East , which came out in the US last October. "Blood" is a slow-build anthem that erupts about 2/3rds through into a joyful group chorus (bolstered by an actual chorus in one of the live videos below). "The Darkest Side" is a more straight-through downtrodden moper - for that reason the hook is all the more sticky.

"Blood" three different times and all tour dates (currently only the festivals) are below...