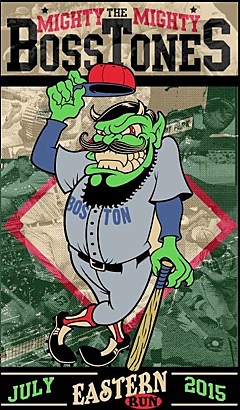 Boston ska-core vets The Mighty Mighty Bosstones have a huge hometown show coming up, opening the Fenway Park stop of the Foo Fighters tour (also with Mission of Burma), and they'll go on a headlining tour right before that. Their tour is with support from Dropkick Murphys offshoot Street Dogs (who were also recently announced for Flogging Molly's 2016 cruise) and new-school ska band The Interrupters, whose 2014 debut album was produced by and features Rancid's Tim Armstrong, and also came out on Tim's label Hellcat Records. During that tour, the Bosstones also play the jam-band-oriented Long Island festival Great South Bay with Hot Tuna, Jefferson Starship and more.

The run with Street Dogs and The Interrupters hits NYC on July 15 at Webster Hall. Tickets for that show are on sale now.

The Bosstones also play Punk Rock Bowling this month with Refused, Rancid, The Muffs, Murder City Devils, Discharage, Sick Of It All, and more. All dates are listed below...