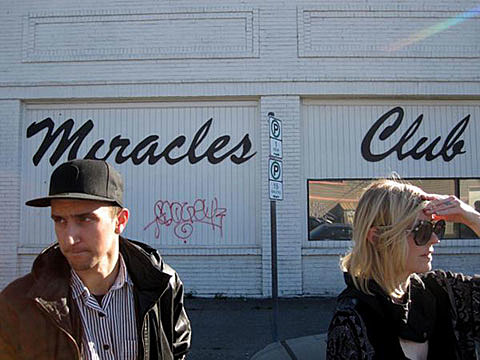 The Miracles Club will play a few NYC shows this month including their previously mentioned PS1 show this Saturday (7/23) with Gang Gang Dance (DJ), Syd tha Kyd (OFWGKTA), Laurel Halo, and others. The next day (7/24), they'll play a Jelly RockBeach show with Death Grips, Bass Drum of Death, MNDR, and Night Manager. Check out a video from the first RockBeach show below.

The following week, Miracles Club will play two more NYC shows: July 28 at Glasslands with Vockah Redu and a FIXED party on July 29 at Public Assembly with Midnight Magic and Trap.Avoid. The Glasslands show is presented by MyOpenBar and tickets are on sale. You can also get advanced tickets for the Public Assembly show.

The Miracles Club also played with Midnight Magic during Northside at the DFA Showcase. YACHT, who headlined that show, was recently remixed by The Miracles Club. They put their twist on the title track of YACHT's recently released apocalyptic concept album Utopia. Grab that above. 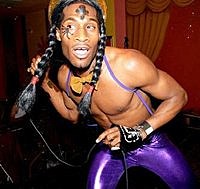 Sissy Bounce artist Vockah Redu (pictured), who is on the Glasslands bill with The Miracles Club, also play PS1 one week later (7/30) with XXXY and Holy Other. Vanity Fair says, "Vockah's shows are elaborately choreographed and costumed, like how Ziggy Stardust would've ended up if he'd been raised in the Magnolia Houses."

All tour dates and video below...