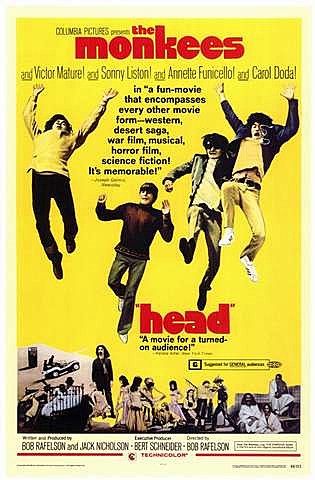 The Monkees made their motion picture debut in the 1968 film, Head, which took the TV pop icons into seriously whacked-out psychedelic territory, courtesy screenwriter Jack Nicholson and director Bob Rafelson (Five Easy Pieces) and threw their teenybopper rep into the fire. A parody of the entertainment industry and anything else they could think of, Head was a flop, but has grown in status over the last 44 years. It holds up quite well.

If you can't make it to this screening, a newly-restored print of Head was included with the Criterion Collection's America Lost and Found: The BBS Story box set that compiles the films of BBS Productions that includes such late-'60s/early-'70s classics as Easy Rider, Five Easy Pieces, The Last Picture Show and more. If you just want the individual movie, you have to still settle for the 1998 pan-n-scan Rhino DVD.

Trailer for Head is below.