Burger (second from right) with The Monks 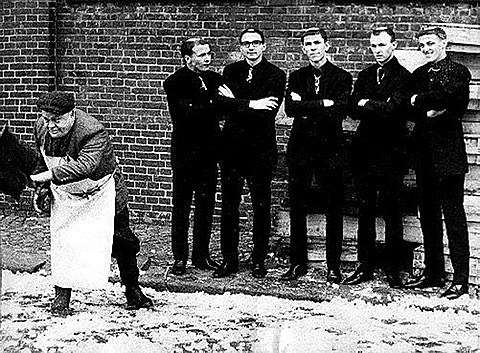 Minnesota Public Radio reports that Gary Burger, frontman of '60s freakbeat band The Monks, died over the weekend at 72. The band was formed in the mid-'60s by American G.I.'s stationed in Germany and came up with a sound that was truly original. Says Julian Cope of their 1996 album, Black Monk Time:

NO-ONE ever came up with a whole album of such dementia. The Monks' Black Monk Time is a gem born of isolation and the horrible deep-down knowledge that no-one is really listening to what your [sic] saying. And the Monks took full artistic advantage of their lucky/unlucky position as American rockers in a country that was desperate for the real thing. They wrote songs that would have been horribly mutilated by arrangers and producers had they been back in America. But there was no need for them to clean up their act, as the Beatles and others had had to do on returning home, for there were no artistic constraints in a country that liked the sound of beat music but had no idea about its lyric content.

While The Monks were never well-known during their original run, the band later achieved cult status and proved influential. The Fall covered them three times in the early '90s and Black Monk Time was reissued by Rick Rubin and Henry Rollins' Infinite Zero label in 1996. The band played reunion shows sporadically over the last 20 years and Burger was elected Mayor of Turtle River, Minnesota in 2006.

Gary, you'll be missed. Rest in peace. Check out some vintage Monks live footage below.