The Monochrome Set back in the day 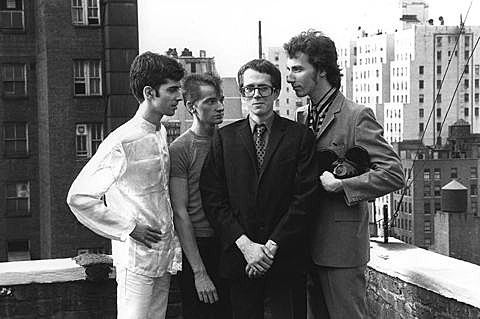 In the late '70s and early '80s, British post punk legends The Monochrome Set made a kind of effete, tongue-in-cheek pop that skewered social mores with a twangy, jangly sound which would influence The Smiths, Belle & Sebastian, Franz Ferdinand and others. And despite singer Bid's flip witicisms, they were exceedingly good at instrumentals too. No one else was quite like them and you can stream some classic tracks below.

The band called it quits in the '90s but reformed here and there for the occasional gig. In 2011, Bid, guitarist Lester Square and bassist Andy Warren got The Monochrome Set back together for real and last year released Platinum Coils, their 10th album and first in 17 years. You can stream that below too.

Bid played Knitting Factory in the mid-'00s with a pick-up band (including members of My Teenage Stride) but The Monochrome Set are coming over for real this spring, playing the 2013 NYC Popfest, which happens May 30 - June 2 at various venues around the city. (Sometimes wishes do come true.) Before Popfest, The Monochrome Set will play Bowery Electric on May 27 and Maxwell's in Hoboken on May 29 and tickets for the latter are on sale now.

The entire NYC Popfest line-up will be announced the first week of March, so stay tuned. Looks like The Monochrome will be playing some non-NYC shows while they're here (no firm dates as of this posting) but there are European dates which are listed below.