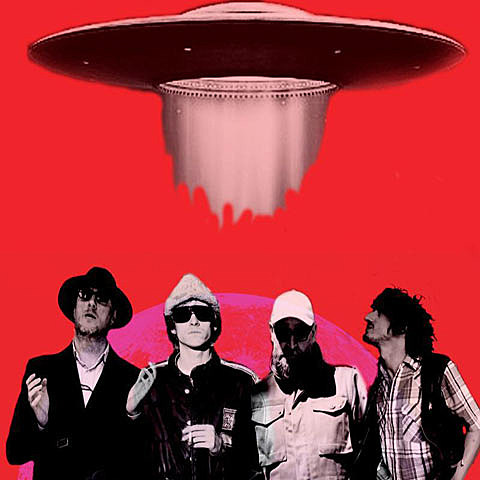 The Moonlandingz is a collaborative project between Lias and Saul from Fat White Family and grim/witty electronic act Eccentronic Research Council. The group actually started as a fictional band that figures into the storyline of Eccentronic Research Council's new concept album, Johnny Rocket, Narcissist And Music Machine...I'm Your Biggest Fan, which was released via FWF's Without Consent label and features BAFTA winning actress Maxine Peake (who you may have seen in The Falling and The Theory of Everything):

[The album] is written from the persuasive point of view of an obsessional fan of a local band - The Moonlandingz, who gig around the fictional South Yorkshire district of Valhalla Dale. The album also sees ERC team up with Lias Saoudi and Saul Adamczewski of South London's The Fat White Family, who ably play the role of the The Moonlandingz, the fictional band at the heart of the story.

You can stream that whole album below.

The four Moonlandingz songs that are woven into the LP were also released as an EP which was released in the UK earlier this year and will get an expanded U.S. release on October 30 via Chimera Music. ERC's dark, analogue synth style fits like a glove with FWF's anarchic (and equally pitch-black) style. Yes, it's a bit like Suicide, but they do it really well and "Sweet Saturn Mine" is a pretty irresistible blast of synth-punk wilding. Check out videos for two versions of "Sweet Saturn Mine" (one being a Sean Lennon "de-mix") and live video from the recent Moonlandingz UK tour, below.

The collaboration worked so well that The Moonlandingz are currently in NY recording their debut album at Sean Lennon's NY studio. There's a new Fat White Family album out early next year as well. Stay tuned.

If you've never checked out Eccentronic Research Council, last year's equally high-concept Magpie Billy & The Egg that Yolked​(​A Study of the Northern Ape in Love) (also narrated by Peake) is worth checking out and you can stream a few songs below.