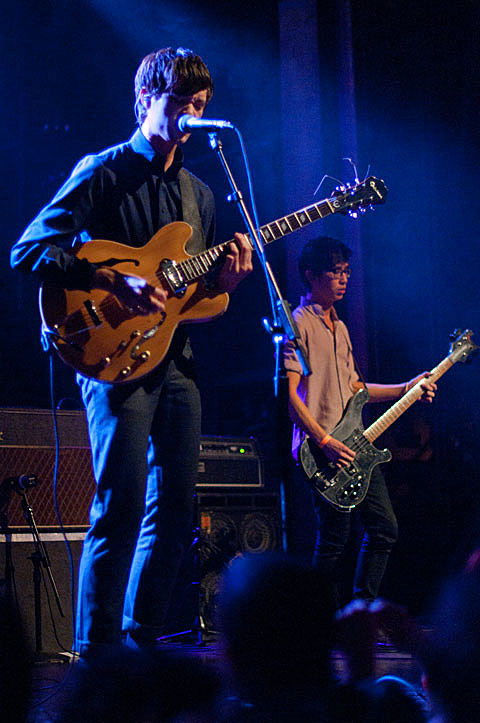 The Morning Benders (whose frontman was spotted at Fiona Apple Friday) posted a statement to their website announcing that they've changed their band name to POP ETC. The statement, reprinted in full below, explains that after getting way bigger due to the success of their sophomore album, Big Echo, they made their first trip to Europe to learn that "the word 'bender' in the UK and many parts of Europe is a slang term for 'homosexual.'" "We were told our band name was the equivalent of 'The Morning Fags' in America," they said. They continued saying, "We simply cannot go on using a name that is demeaning to the gay community. The reason we are making music is to reach and unite as many different kinds of people as possible, and the idea that our name may be hateful towards anyone makes us sick."

In honor of the name-change announcement, they've released a new mixtape, which includes a cover of Bjork's "Unravel." You can download the mixtape at the POP ETC website or stream it in full below. The new material suits their new name really well, complete with dance beats and auto-tuned vocals. A full length album is reportedly on the way too.

Mixtape stream and full statement below...

When we started this band in 2005 we had no expectations. From an early age I had a deep love for music and its power to bring people together, but the truth is, in 2005 I had just finished writing my first songs and all I wanted to do was start a band as soon as possible. That same year I had moved to Berkeley to attend college, and of the first 5 people I met, 1 of them happened to be a drummer, and 1 happened to be a guitarist. It was kismet; we started a band. It wasn't long before we got offered our first show on Lower Sproul (Berkeley's school quad). Now all we needed was a band name. We came up with two options: "The Beatles 2" and "The Morning Benders." We went with The Morning Benders.

Fast forward to 2010, many a dive bar, school quad, house party, county fair, pizza parlor later. We had just released Big Echo, and for the first time we were preparing for a world tour. We had toured a fair amount leading up to Big Echo, but never overseas, so when it came time to tour the UK and Europe we were quite excited. The touring went well, and we had an amazing time, but also something happened that we hadn't anticipated. As soon as we had landed in London people started asking us about our band name. "What does 'Bender' mean to you?" people would ask. "Are you seriously called 'The Morning Benders' ?" was a common question. For those of you reading from America, you may still be confused. Well, it turns out that the word 'bender' in the UK and many parts of Europe is a slang term for 'homosexual.' We were told our band name was the equivalent of 'The Morning Fags' in America. We had been called The Morning Benders for 5 years, and we were just finding this out now? It was shocking. And quite sad, to say the least. We had spent those years touring night and day, championing our name everywhere we could, only to find out that the name had an alternate meaning- one that made us look hateful, or at best, ignorant.

At the time we didn't really have many options; we had already booked several tours as The Morning Benders and had just released our new album. We couldn't very well change the name right then and there. We had unwittingly gotten ourselves into a problem with no immediate solution, it was extremely disappointing. But that's all said and done. Now it's 2012. We are at the tail end of making our third album, and we have been given the opportunity to change our band name. We've decided to seize that opportunity, and here's why--

1. We simply cannot go on using a name that is demeaning to the gay community. The reason we are making music is to reach and unite as many different kinds of people as possible, and the idea that our name may be hateful towards anyone makes us sick.

2. In the UK and many parts of Europe the name has simply become too distracting. The MUSIC has always been our number one focus, and we want to present that to people in as pure a way as possible

I know that many people around the world have grown to love the name "The Morning Benders," and understandably have memories and experiences associated with it. Obviously we can understand this, we've lived and breathed this band for 7 years. However, for those of you that know and follow us, you also know that we are committed to change. We've always promised our fans that we will never settle into a place that feels safe and easy, because that leads to boring art. It is true that we didn't anticipate this specific twist in the road when we set out on this musical journey, but we still like to think of this as merely a further embodiment of our commitment to change. We believe that it will only lead to new growth and excitement.

Thank you for your attention, your love, and your support.

From henceforth we shall be known as POP ETC

Much love and respect,