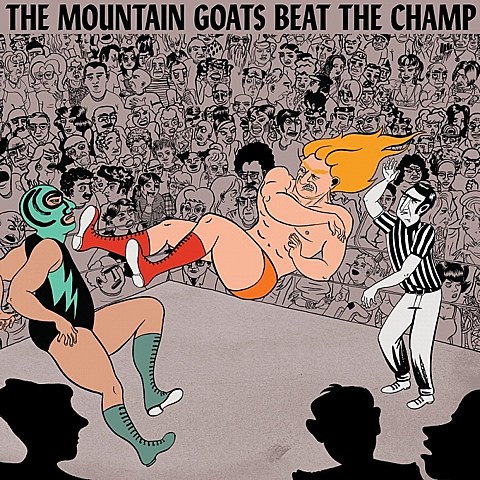 The Mountain Goats will release their fifteenth album, Beat the Champ, on April 7 via Merge. Main man John Darnielle says the album is inspired by wrestling. Here's more:

The wrestling songs, several of which, surprise surprise, are really more about death and difficult-to-navigate interior spaces than wrestling -- those will all be let out of their cages on April 7th in North America. The album's called Beat the Champ, and features cover art by Leela Corman; the vinyl will be two LPs at 45 rpm with lyrics printed on the gatefold. Why lyrics now, after a whole career of refusing to print lyrics? I don't know. Instinct. I am especially proud of these ones. They are rather more emotional than you might guess at first blush.

...All copies of the deluxe LP are gold and green vinyl until we run out --- gold for the championship belt, green for the payout LA wrestlers got when they took home the Beat the Champ title. All that glory. All that shine. Nameless bodies in unremembered rooms. Some people might be thinking to themselves, JD, wrestling, I don't know, I've never really been into wrestling, but did I steer you wrong with the Bible album, even though you may not have been super-into the Bible? Fear not. In a world of false promises and hollow gimmicks, please rest assured that the old maxim still holds true, whether scrawled on the back of a claim check or carved into a bench in an abandoned locker room: you can't trust much, but you can trust the Mountain Goats.

John & co. have also announced a tour surrounding their appearance at Atlanta's Shaky Knees Festival. The tour brings the band to NYC on April 9 at Webster Hall and April 11 & 12 at CIty Winery. Tickets for the Webster show go on sale at 10 AM on Friday (1/23) with a BrooklynVegan presale starting at 10 AM on Thursday (1/22). Check back here Thursday morning for the password. Tickets for City Winery should be on sale soon.

All dates are listed, with a song from the new album, below...

The Mountain Goats - "The Legend of Chavo Guerrero"