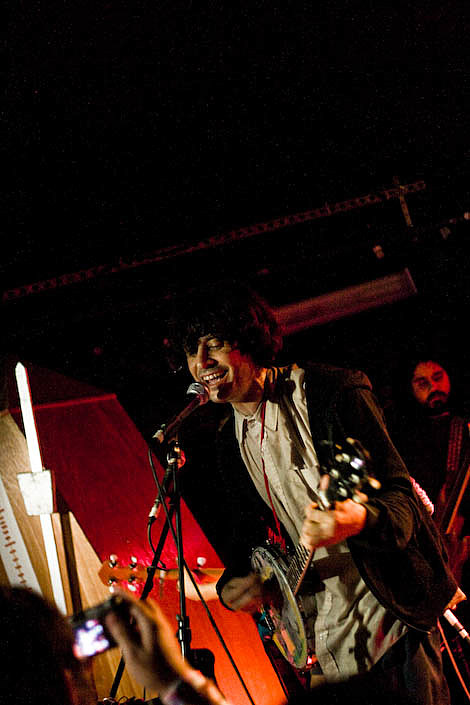 The Music Tapes played Maxwell's in Hoboken on Sunday (3/1), and for those who missed the criminally under attended show (maybe something to do with the weather), you're in luck - they'll be back in town on Tuesday (tonight, 3/3) playing the Bell House with the same lineup of opening acts: musical mad scientist Brian Dewan and upbeat Elephant 6-ers Nana Grizol. Tickets are still available, and we're giving away a pair of tickets. Details below.

For the show at Maxwell's, I trekked through the blowing snow to arrive in Hoboken, a place that seems to have frozen in time the most picturesque parts of every U.S. small town. Inside the show space, hidden past the club's front restaurant-bar area, 40-50 brave concertgoer gathered around the stage, where second-act Nana Grizol rocked with warming exuberance. (I missed opener Brian Dewan - more on him later, though.)

Nana Grizol's eight-strong lineup crammed the stage, which was crowded with 7-Foot Tall Metronome and Static the Singing TV standing at attention for the upcoming Music Tapes set. But first, the Athens, GA, band shared songs and swapped instruments, which included guitar, bass, and two drum sets. One member switched from clarinet to trumpet to melodica with ease. The horn section expanded into three trumpet harmonies, then contracted to a single euphonium. The bulk of the songs were fronted by Theo Hilton, who sang with a kind of Promise Ring innocence in his voice. The roaring, clanking sound convinced me to shell out for a copy of their 2008 Orange Twin recording, Love It Love It.

Between bands, opener Brian Dewan set up a projector and screened a short film so good it made me wish I trudged out sooner to catch his solo set. The hand-drawn animated slides that populated the film told a short history of civic pride, coyly poking fun at the structures of society by connecting scenes of Aztec ritual sacrifice, paying taxes, and odious parking meters into a modern parable that paid homage to archaic public service videos. Each frame change was announced with a studious "plonk."

Shortly after, The Music Tapes took the stage, borrowing most of Nana Grizol's members (or maybe vice-versa). Julian Koster, as always, fronted the band with a banjo and saw. Elephant 6-regular Nesey Gallons also played banjo - in all, a lot of the Elephant 6 holiday tour seemed to be on board. On "Aliens," Dewan even joined the band, playing one of his homemade Melody Gins, a knob-covered oscillator contraption.

Koster played many of the same songs he did at the band's Mercury Lounge CMJ show: "Freeing Song for Reindeer," "Majesty," "Song for Oceans Falling," "Orchestra's Orchestration" and "What the Television Tells Us" (the latter two with props). A number of the songs started with just Koster and ended in double-drums, double-distorted banjo noise. On "Song for the Death of Parents," Koster played percussion by bouncing a kickball on a soup kettle with a microphone hidden underneath in a perfect melding of theme and medium.

Julian came into the crowd to play a singing-saw version of "The First Noel" and a song on his tiny electric organ, before returning to the stage and closing the show with "Manifest Destiny." (He also promised to play a crowd game with bells on Tuesday at the Bell House.)

Live, The Music Tapes continue to be one of the most consistently entertaining bands around. The scratchy, distorted sound of its recordings (can a singing saw's sound actually be recorded?), while interesting, drastically understates the buoyant joy and enigmatic energy of Koster and Co. in person.

Besides at tonight's Bell House show, New Yorkers can catch Brian Dewan when he performs a free set with his homemade-instrument project, Dewanatron (with cousin Leon), at the opening of Pierogi Gallery (177 N 9th St, Brooklyn) on Saturday, March 7, 9pm.

Video and contest details below...

To win a pair of tickets to tonight's show at the Bell House, email BVCONTESTS@HOTMAIL.COM (subject: Music Tapes). Include your first and last name. A winner will be picked at random ASAP and contacted.