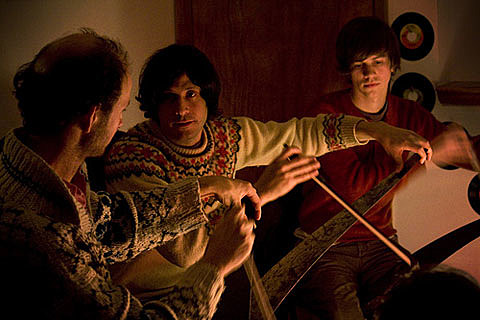 Julian Koster and The Music Tapes will be delivering lullabies at bedsides from bedroom to bedroom, and house to house in Boston, New York and Philadelphia in August. Featuring new songs as well as some of the gentler songs from Music Tapes for Clouds and Tornadoes and the 1st Imaginary Symphony for Nomad, lucky hosts will be visited at the bedtime hour by the most lulling of music tapes songs, by the sounds of the glowing and enchanting "Ghost Orchestra," Singing Saws, Stories, and so forth.[Merge]

Similar to their annual holiday caroling tour (though on a less-road-intensive scale), Julian & the Music Tapes will be visiting houses and apartments in Boston, New York and Philadelphia this August. In each city, they'll also be playing a game of "St. Nikolai the Wonder Worker's Wishing Game of Candles" at a secret location.

The 2009 Holiday Tour packed a number of New York stops into two days. Check out our long-lost review/post on those below.

Dates and info on how to invite the tour (and get invited) are below too....

To invite The Music Tapes to your house, send an invitation to:LullabyeDeliveries@gmail.com to reserve a time slot. There will be very few slots available so the first and most warm invitations will have to be chosen. Sleep over gatherings are accepted and even encouraged, although the lullabies will be absolutely delighted to regale audiences of only one. Locations of the lullaby events will be closed, and will not be announced to the general public, though you are heartily encouraged to make use of whatever means you wish to make new friends and gather.

Further instructions and information to be found via automatic reply from: LullabyeDeliveries@gmail.com and www.orbitinghumancircus.com!

Thank You Very Much!

Julian Koster's Holiday Caroling tour came to New York for two nights of apartment shows on December 16th and 17th. With the tour in its second year, Koster upped the ante by bringing along two friends and a slew of new instruments. Badger, the short, stubby saw that's accompanied Koster on the road in recent years, stayed at home to make way for three others. The band sang with banjos, a xylophone, a chord organ and a guitar behind glowing Christmas figurines.

The tour's first NYC night traveled to Williamsburg and a non-show in Harlem (which was a bust, due to the always uncertain, ad hoc planning of the trip) before making its way to Long Island City, Queens. The space there was a massive, 17-bedroom loft called Wonderland Collective, and in a cozy backroom, Julian and Co. set up shop.

The band played for more than an hour - sometimes just Julian, sometimes as a trio with their assorted toys. One of the best featured a tape loop (which captured, he said, an old hobo singing) paired with bowed banjos. Most of the carols were preceeded by inventive tall tales and Christmas fables (which hopefully get collected at some point). From the Music Tapes catalog, Julian performed "Manifest Destiny," "Freeing Song for Reindeer" and newish, so-far-unreleased track "Takeshi and Elijah." They hung around after to answer questions about their trip (the apartment being their last stop of the night). In a little more than two weeks, the band made a hundred plus stops with little off-time or rest. At another visit, one E6 Message board poster asked about the possibilitiy of a new Music Tapes release and got some good news: "[Julian] said that he had one near completion that will hopefully be released in April."

The tour's second NYC night stuck to Brooklyn, with one of the shows happening at the Bed-Stuy abode of Tom Williams of Matador Records/Hit Singularity [pictured above]. We're told the in-house treats for that included "Neutral Milk Hotel/Music Tapes-themed goods, including 'King of Carrot Cupcakes,' Static the TV cookies and a cake of the (though quite abstract and a little gooey) 'In The Aeroplane Over The Sea' album cover."