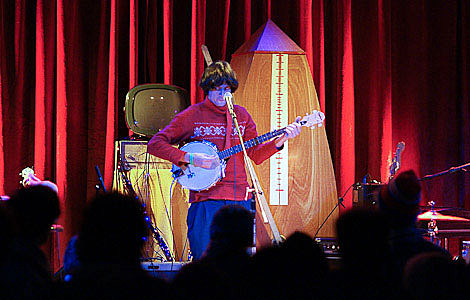 This November and December, The Music Tapes will be bringing a comforting, enchanting, and very special evening of Music Tapes' dreamlike songs, stories and games for sleepover parties to ordinary homes across the land (US and Canada). The Music Tapes are now accepting invitations, and plan to visit over 200 homes! As with the Music Tapes' caroling and lullaby travels of years past, they will stop at several houses a night in each city visiting also far off out of the way places most tours never get to go.

The Lullaby evenings with include songs from the Music Tapes forthcoming 2011 record, as well as from Music Tapes for Clouds and Tornadoes, The 1st Imaginary Symphony for Nomad, and The Singing Saw at Christmastime, along with new Music Tapes games and stories. The entertainment, though sometimes more exciting than lulling, are all in honor of the comforting moments directly preceding and following sleep when we find ourselves happily unsure of whether we are awake or are dreaming. [Merge]

The Music Tapes annual holiday tour is in its third year, and the small scale events that populate the route tend to be a really good time. This trip is by far the most expansive, with tour dates running from the South to the West Coast to New England and even Canada. It kicks off November 4th, and hits NYC December 19th and 20th. Koster and friends usually plan for a few stops each night, so between the two dates there's a decent chance one performance will be near you. Remember, the dates are tentative, so email the tour address before you show up for more info.

Complete dates and how to get in touch with the tour (and invite them to your house!) are below...

For more information and to find out where the tour is stopping in your town, write lullabyedeliveries@gmail.com to receive an automatic reply and as always visit The Music Tapes' online home at orbitinghumancircus.com. Dates may shift around a little bit, so be sure to check the website and email often.

Also, the St.Nikolai Game will be played in select cities at a location to be revealed via the email autoreply. All who wish to play must bring a candle 10 or 12 inches tall!