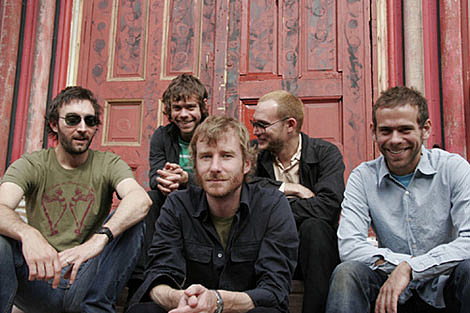 Pitchfork: Sufjan Stevens played on the last album. Do you have any guests on this one?

The National's Matt Berninger: We have a bunch of people who have come in and out of the studio, which is behind Aaron's house. It was sort of an open door policy; friends come over and do stuff. So a lot of people did do things. I don't know exactly how much of everything we're going to keep. I will say that Sufjan did something that we are going to keep on a song. He sang some weird little backing vocal melodies-- no words. It was on a song that had just the right sort of odd, creepy vibe. There are a few other people that have come in and out. I don't want to say who yet [laughs] because we still might be editing them out. But I'm pretty sure that the little Sufjan vocal thing is going to be in there. It really did something special with that song.

It's no surprise that the new National album will have guest appearances by friends of the band. Even before their massively collaborative Dark Was the Night project, the band had a history of working with Sufjan, Thomas Bartlett, Clogs' Padma Newsome and many others. Bryce Dessner was just a guest at St. Vincent's Allen Room show on Friday (January 29th).

The National's spring/summer tour dates are approaching. Only single tickets are left for their Radio City show on June 16th, so not totally surprisingly, the band has added a 2nd show, though not at the same venue or in the same month. It's a ticketed Celebrate Brooklyn show at Prospect Park Bandshell Tuesday, July 27th. Tickets go on sale Thursday, February 4th at 2pm.

Various videos of the National with friends (and alone) are below...

The National: Mistaken For Strangers (live)