The National @ Outside Lands 2009 (more by Chris Graham) 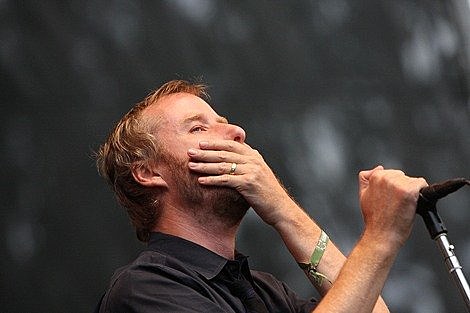 We have exciting news for you this morning. We are very pleased to announce the first tour dates in support of our new album in April, May and June.

The as of yet untitled follow-up to Boxer will be released worldwide in May on 4AD (specific date TBA). The shows begin at the Big Ears festival in Knoxville, Tennessee on March 28th followed in April by two special shows April 22nd and 23rd at the National in Richmond, VA. We will then play Royal Albert Hall in London on May 6th, Le Zenith in Paris with PAVEMENT on May 7, and Astra in Berlin on May 9 before starting a North American tour in Los Angeles at the Wiltern on May 22nd. Ramona Falls will be opening our US shows on the west coast. - The National

This will be the National's first album on 4AD which absorbed Beggars Banquet which is the label their last album was on. Other ticket links and all dates below...