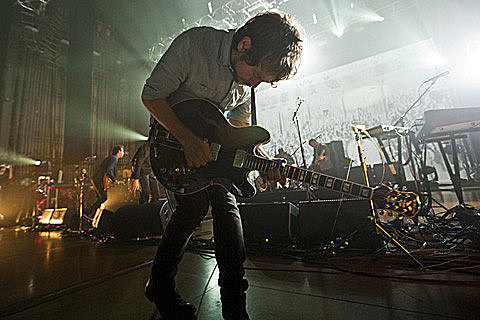 Early this morning we wrote:

...the National headed to LA for another great triple bill last night (9/11) at Hollywood Bowl. They played that show with Neko Case and Sharon Van Etten. Their next scheduled gig is November 6th in Singapore. Hopefully more NYC shows get announced soon, but for now they have nothing coming up in North America at all.

Well, that didn't last long! Santa Claus will arrive early this year because The National will play a four night residency in NYC at Beacon Theater from 12/12 - 12/15 as part of a short stint of just-announced North American dates in late November/December. Each NYC show is with a different great opener. The The War on Drugs open the first night. Sharon Van Etten the next. So Percussion after that. And Wye Oak, who just opened for them in Philly, opens the last.

Tickets for all of the Beacon Theater shows go on sale on presale on 9/14 at 11AM, with regular sale hitting 48 hours later.