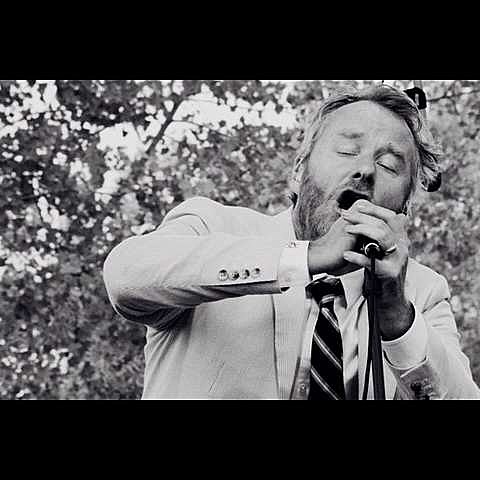 Lines stretched for blocks as Iowans lined up to see President Barack Obama at a campaign rally at Living History Farms in Urbandale, his seventh trip to the all-important swing state this year.

Some Iowans are bound to be disappointed because space is limited to the narrow main street at the outdoor museum. The gated venue was nearly full shortly before noon and hundreds were still waiting to get in.

The crowd is being routed through security and then a gantlet of volunteers trying to get them to vote early for Obama.

The president's visit - the second to Iowa this week alone - resembles a summer music festival, with performances by indie band The National and alternative-rock hero Chris Cornell. Both played very subdued sets rather than fiery crowd-rousers. The music competed with the whir of a black helicopter overhead. - [Des Moines Register]

As we mentioned last week, The National were tapped to perform before a speech by President Obama in Des Moines, Iowa on Saturday (9/1) at Living History Farms where Soundgarden's Chris Cornell performed as well. There's video of The National's performance at the bottom of this post.

While on the subject of Obama support, Hannibal Buress, Rory Scovel and many more TBA will be performing at a benefit titled "Four More Years: A Benefit Show for the Status Quo" that happens at the Bell House on October 11. Tickets (proceeds of which go to benefit the Obama Campaign via PAC) are $20 and on sale now.

Obama is now in Charlotte, NC for the Democratic National Convention which is rolling on as we speak. The closing night party is being DJ'd by Adam 12 of She Wants Revenge. (Really??) What's in his record bag? Lots of Aretha, The Jackson 5 and even Tupac.

Adam 12 probably won't be playing any records by Frank Turner whose UK folk bent doesn't fit the playlist, but neither does his politics, despite a sound that might lead you to believe he's pals with Billy Bragg. Turner told The Guardian (via DailySwarm):

To start with, most people don't seem to understand what the difference between left and right is. For example, the BNP are a hard left party. I consider myself a libertarian, I consider myself to be pretty right wing and I get shit for saying that out loud. I was thinking about it the other day, I was thinking about how, quite often, I do keep myself to myself on the subject because I can't be fucking bothered to have some guy look all shocked at me because I think socialism's retarded.

Video of Chris Cornell and The National's Obama-opening set is below.