the whole crew (via) 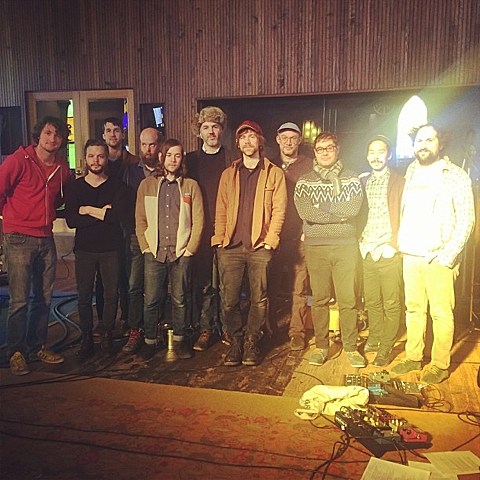 The National have been talking about an all-star indie rock tribute to The Grateful Dead for long time now, and 2015 would be a good year to finally release it given all the excitment surrounding The Dead's 50th anniversary. It's seeming like a possibility that that will in fact be the case, as the band are/were up in Woodstock at Dreamland Recordings working on it.

We already knew they were planning to include members of Vampire Weekend, Bon Iver, Kurt Vile, The Walkmen and Megafaun, and from the pictures they've been posting on Instagram, it's looking like way more really exciting people are involved too. It had already been talked about to maybe include Sonic Youth guitarist and major Dead fan Lee Ranaldo, but it's now confirmed that he recorded at Dreamland with them too. Will Oldham (aka Bonnie 'Prince' Billy) is there (!). Kristian Matsson (aka The Tallest Man on Earth) is there. Walter Martin from the Walkmen is pictured. Cass McCombs and Phil Lesh collaborator Joe Russo, who both just played a Dead tribute in Brooklyn were there, and Sam Amidon too. Josh Ritter's band, etc member Josh Kaufman is there along with his former Yellowbirds bandmate Sam Cohen, and Takka Takka/Gabriel and the Hounds/sometimes National, etc member Conrad Doucette is in the pictures too.

Looks like this is turning out even more exciting than it first seemed. Check out more pictures from the recording sessions below...

We just closed the Thruway with that jam :) #gratefuldead #playingintheband

Not sure Bryan will ever play a drum set again after this thing :)

Can't believe we got to record grateful dead songs with @leeranaldo thank you!!

Finally holding the telecaster I recorded Alligator on again! Thank you @kaufyismynamo

Tracking at Dreamland with members of The National and friends. What a great room to record in!