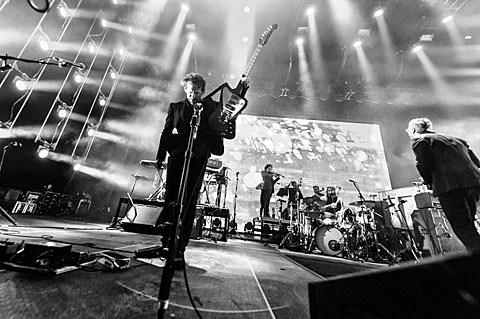 The 24th Annual Tibet House US Benefit Concert happens on March 11 at Carnegie Hall, and since we last spoke, the lineup has been expanded. Matt Berninger and Aaron Dessner join their previously announced bandmate Bryce Dessner (all of The National). Robert Randolph was added as a performer as well, Chuck Close, Maggie Gyllenhaal and Peter Sarsgaard will be Honorary Chairpersons for the evening, and there will be a collaboration between UK poet Mike Garry and British composer Joe Duddell.

UPDATE: The National also released "I Need My Girl" from 2013's Trouble Will Find Me as a single on iTunes today (2/4), and it comes backed with a cover of Perfume Genius' "Learning." You can stream that cover below.

The show happens in the midst of The National's extensive world tour, which currently has them over in Australia. Still no NYC dates for the full band at the moment, but the tour was just expanded (including Sasquatch). Updated dates are listed below...