The National @ Barclays Center in 2013 (more by Dana (distortion) Yavin) 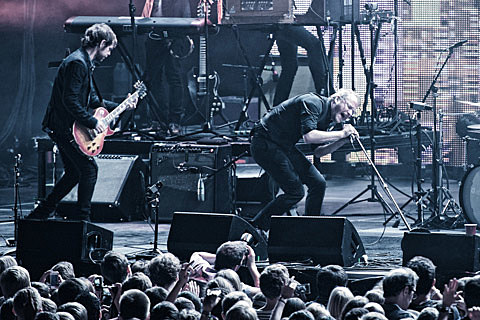 If you haven't seen the National documentary 'Mistaken For Strangers' yet, July 7 is your chance when it screens for $5.00 at City Winery in NYC (try not to drink all the wine... because then you won't remember the movie!). One night earlier City Winery is screening a documentary about one of The National's favorite bands, the Grateful Dead. That one is free (don't take the brown acid).

The National movie recently opened across Europe where The National will be touring next week. All dates are listed below, even the ones they cancelled in Russka and Ukraine. In April they announced:

Due to the ongoing political crisis in the region, we are sad to report that we have decided to cancel our shows in Moscow, St. Petersburg and Kiev this summer. Ticket refunds are available at the point of purchase. We remain hopeful of coming to play for you in the future and we sincerely hope this current instability resolves in a positive, democratic and peaceful way. Take care of yourselves and we hope to see you soon.

They'll see the U.S. again in August whtn they play a series of festival dates including Made in America in Philly, Boston Calling in Boston, and Riot Fest in Chicago and Toronto. Their most recent NYC shows were in Prospect Park for three nights in a row. We also caught them this year at Sasquatch, in Austin, and in Chicago.