conceptual art for "A Whole Lot of Sorrow" 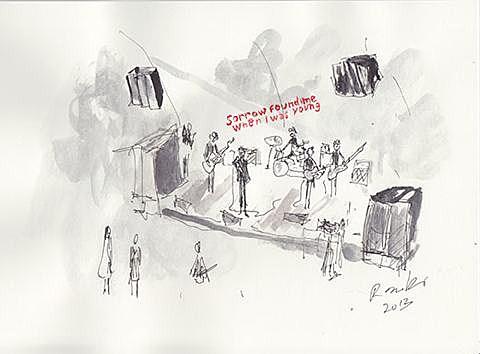 "Don't they do that already?" is surely the smartass comment someone will make upon hearing the news that The National will perform one song for six hours straight at MoMa PS1 on May 5. The song in question is "Sorrow" (from 2010's High Violet) and the marathon performance is part of an installation by Icelandic artist Ragnar Kjartansson titled "A Lot of Sorrow." Here's more info:

By stretching a single pop song into a day-long tour de force the artist continues his explorations into the potential of repetitive performance to produce sculptural presence within sound.

Sorrow found me when I was young,
Sorrow waited, sorrow won

commences the song by The National, whose music and lyrics repeatedly conjure notions of romantic suffering and contemporary Weltschmerz--themes Kjartansson often uses in his own work employing references as wide-ranging as Ingmar Bergman, the German Romantics, and Elvis Presley. As in all of Kjartansson's performances, the idea behind A Lot of Sorrow is devoid of irony, yet full of humor and emotion. It is another quest to find the comic in the tragic and vice versa.

The event is PS1's final Sunday Session of the season and tickets ($15) are on sale now.

Tickets are also still available to see The National at Barclays Center in June.