The National at Beacon Theater in 2011 (more by Toby Tenenbaum) 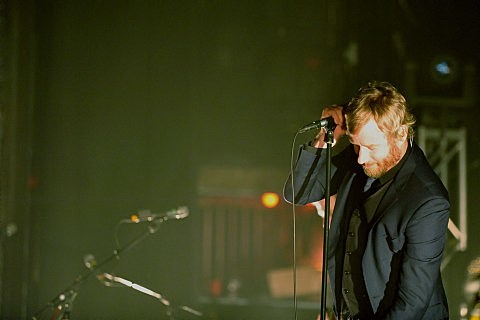 The soundtrack to Game of Thones: Season 2 comes out June 16, a week after the S2 finale airs on HBO. It's mostly Ramin Djawadi's thunderous score, but does contain The National doing "The Rains of Castamere."

This probably doesn't mean so much to people who have only watched the series, but those who have read the books know it as one of the biggest hits in Westeros (#1 in Casterly Rock two years straight), sung by any minstrel worth his lute. (Minstrel songs, and lengthy descriptions of food are probably the two biggest omisions the series has made from the books thus far.) The lyrics are by Song of Ice & Fire (of which Game of Thrones is based) author George RR Martin, but the National perform the appropriately sorrowful music (composed by Djawadi). You can stream it via YouTube below.

Maybe for the Season 3 soundtrack they can get Bon Iver to sing "The Bear and the Maiden Fair." This Sunday is the penultimate episode of Season 2 of Game of Thrones, which was scripted by Martin himself.

The National - "The Rains of Castamere"