A still from 'Mistaken for Strangers' 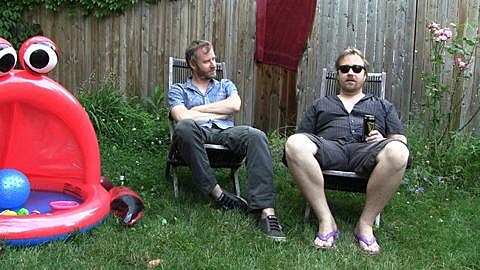 The National, who'll headline the Barclays Center in June, are the subject of a new tour documentary, Mistaken for Strangers, which will make its premiere at the 2013 Tribeca Film Festival (April 17 - 28). The film was directed by Tom Berninger, whose brother Matt is lead singer of The National. Here's the synopsis:

Adrift in life and fuelled by the desire to create, Tom Berninger accepts his brother's offer to come on The National tour as a roadie and decides to chronicle his experiences with the band. Although Tom starts off with dreams of making a rock documentary (you can watch the portaits he made on each of the band members), a different story emerges as tensions among the band members lead to unforeseen drama. Following the band from Berlin to Paris to Los Angeles to a 2010 Obama rally in Madison, Wisconsin, Mistaken for Strangers is not your typical road documentary.

The film will screen on April 17 and will be followed by a special live performance by The National.

In related news, The National are co-headlining (with fun.) the Boston Calling Music Festival which goes down in Beantown on May 25 and 26. The fest also includes appearances by The Shins, Of Monsters & Men, Dirty Projectors, Andrew Bird and more. Tickets to Boston Calling go sale Friday, March 8 and the whole line-up is below.