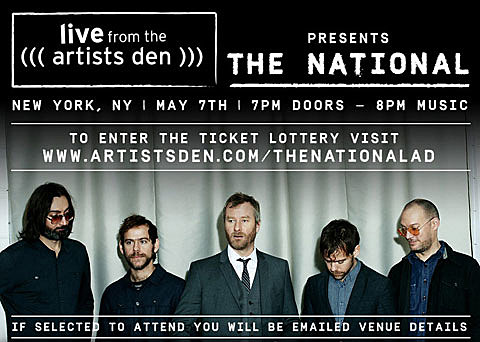 Head to the Artist's Den for a chance to win tickets to the above-advertised National taping on May 7th.

Two days earlier the band, who recently made an appearance as part of Tribeca Film Fest, are playing a song repeatedly for six hours at PS1. They kick off a tour in Ithaca on May 16th, and play the Barclays Center in June.

Meanwhile, Crossing Brooklyn Ferry (the fest curated by The National's Bryce and Aaron Dessner) kicked off last night (Thursday, 4/25) at BAM and continues through the weekend. with three nights at BAM. Tickets are still available for Friday and Saturday.

Lat night The National appeared on Fallon. Watch both songs they played at the show, below...