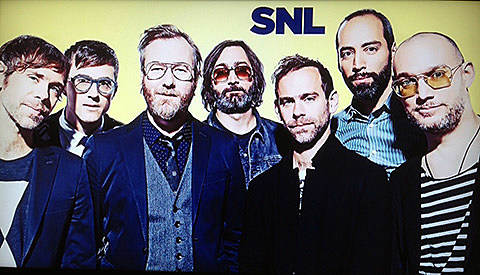 Last night (3/8) was a very Brooklyn episode of Saturday Night Live with Girls' star/creator Lena Dunham hosting, and The National as musical guest. The National performed "Graceless" and "I Need My Girl," both of which are from the band's 2013 album, Trouble Will Find Me and you can watch video of both below.

To up last night's starpower, the episode also featured a bevy of cameos: Liam Neeson, John Hamm, and former SNL castmember Fred Armisen. The next new episode of SNL is March 29 with Louis CK as host. No musical guest has been announced, unless Louis is gonna pull a Drake.

The National will play two Celebrate Brooklyn! shows in Prospect Park in June as part of the band's continuing world tour. Watch their SNL performances below...

The National - "I Need My Girl"