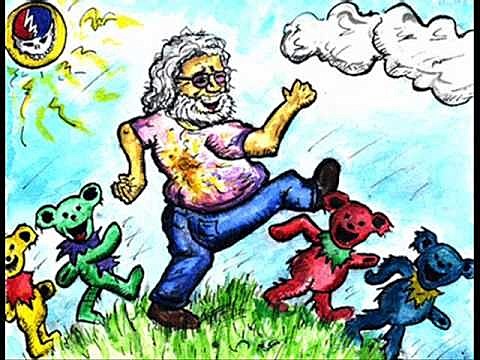 One of the more polarizing bands, as far as indie rock fans are concerned, is the Grateful Dead. But despite all the hipsters who want to make sure no one thinks they're hippies, there's a big chunk of the indie community who actually likes this band, so it's pretty cool that The National have gathered members from a bunch of great indie bands -- Vampire Weekend, The War on Drugs, Bon Iver, The Walkmen, and Kurt Vile & the Violators -- to participate in a Grateful Dead tribute album, as Relix reports. (They announced it yesterday [8/1], aka Jerry Garcia's birthday.)

Like Dark was the Night, which The National's Dessner brothers also curated, this will benefit AIDS organization Red Hot. But unlike that one, which was a compilation, this one "will hone in on a few all-star ensembles assembled for the project as well as select featured guests." The Relix article continues:

The Dessners also cite Sonic Youth's Lee Ranaldo and Yo La Tengo's Ira Kaplan as big-name indie guitarists with an affinity for the Dead who'd fit on the album. In 2012, Aaron Dessner, The Walkmen's Walter Martin and the Devendorf brothers performed with Bob Weir at benefit show held at the Dead guitarist's TRI Studios. Vampire Weekend's Chris Tomson has also performed with Weir at TRI while The War on Drugs regularly cover "Touch of Grey." As they mention in the September issue of Relix, the Dessners riffed on "Eyes of the World" for eight hours during their first jam session with Bryan Devendorf in middle school."

"There are all kind of corners of the musical world that are deeply influenced by the Dead that one wouldn't expect," Bryce Dessner says. "Lee Ranaldo is a crazy Deadhead. So that was part of the idea but I think it is broader than that now. Jerry Garcia was a total cat."

Both Lee Ranaldo and Ira Kaplan just helped commemorate the closing of Maxwell's.

Grateful Dead lyricist Robert Hunter is playing a few Northeast shows this year, including 9/26 at The Paramount (tickets), 10/5 at Capitol Theatre (tickets), and 10/10 at Town Hall (tickets). All dates are listed below.

And, both Vampire Weekend (tickets) and Kurt Vile (tickets) are each about to play their biggest NYC shows yet this fall.

Watch a video of members of The National performing with the Dead's Bob Weir in 2012, below...