photo: The National at Barclays Center in 2013 (more by Dana (distortion) Yavin) 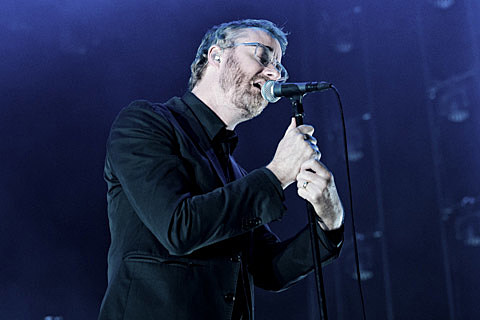 Although The National haven't released an album since 2013's Trouble Will Find Me, they've had a very busy two years. They premiered their documentary, Mistaken for Strangers, last year at the Tribeca Film Festival and toured the US and Europe. Frontman Matt Berninger also recently formed a band with ex-Menomena member / Ramona Falls frontman Brent Knopf called EL VY and they're releasing their debut LP, Return to the Moon, on October 30 via 4AD. Berninger spoke to Rolling Stone yesterday about EL VY and also mentioned that The National's seventh album is being worked on:

We're working on a record. We're collecting all the ideas. Those guys are coming out to California for a week. We're in the anything-goes, fun phase of that. That's happening, but no idea when.

The National recently debuted a new song called "Roman Candle" during their set at a Los Angeles benefit show for non-profit Cooperative Education, which was co-founded by Berninger's cousins, Joe and Jeff Berninger. A few days later, they performed the song at Treasure Island Music Festival under the title "Checking Out." Before playing it, Berninger said, "It was called something else yesterday. Today it's called 'Checking Out.' Tomorrow, nobody knows." We'll have to wait until their pre-NYE shows in Aspen to see if it changes once again. For now, a video of the band performing it is below.

The National's only date besides those Aspen shows is an Australian festival in 2016, and they probably aren't adding much more for a while considering EL VY begin their tour in November. Since we last spoke, Wye Oak (whose drummer Andy Stack is in EL VY's live lineup) were added as support to select dates on that tour, including the NYC shows on 11/13 at Bowery Ballroom and 11/14 at MHOW. Both of those are sold out.

In other National-related news, guitarist Bryce Dessner joined German musician Alva Noto and Japanese composer Ryuichi Sakamoto in creating the score for Academy Award-winning director Alejandro Gonzalez Iñárritu's upcoming film, The Revenant. The film will be released on January 8. You can watch the trailer below.

Watch the video of The National's performance of "Roman Candle" aka "Checking Out" and check out the EL VY/Wye Oak tour dates below...