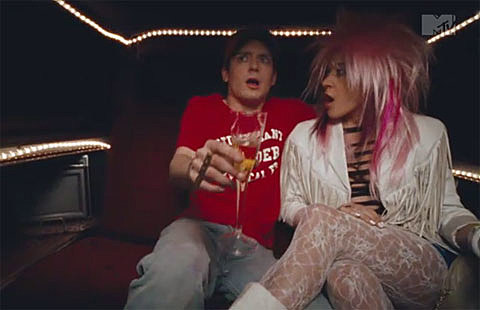 "Beastie Boys have always had a fondness for pop culture and nostalgia. Now, they're looking inward on the new video for "Make Some Noise," the first single off their heavily anticipated eighth album Hot Sauce Committee, Pt. 2. Doubling as an extended trailer for Fight For Your Revisited, the 22-minute short film, which was directed by group member MCA, recently premiered at Sundance. "Make Some Noise" features Elijah Wood, Danny McBride and Seth Rogen as younger, more hellacious (but just as hilarious) versions of their former selves. Given the group's bad boy past, we're guessing it's not too far from the truth.

The Beastie Boy doppelgängers break into bodegas to steal beer, crash fancy restaurants and guzzle champagne in white limousines with ladies of, uh, questionable virtue, before facing off against their biggest challenge: their older selves. As John C. Reilly, Jack Black and Will Ferrell step out of a DeLorean, an inter-generational battle is set up before fading to black. Damn you and your clever end points, MCA! Guess we'll just have to see the movie to see how this one ends.