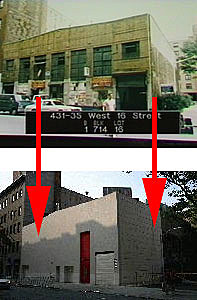 Well, that answers the main question I had - the Highline Ballroom DOES have something to do with the High Line Park. We also already know that some of the performances for the David Bowie-curated High Line Festival (which benefits the High Line Park) are taking place in the Highline Ballroom. That includes the two shows by Laurie Anderson (who happens to be married to Lou Reed) (and who is separately being honored by Lou Reed, David Bowie, David Byrne and others to benefit the Kitchen).

That's a photo (to the right) of what the club used to look like, and what it looks like now. I found that at Curbed. Tickets are on sale, sold out, or will be on sale for the following upcoming shows....