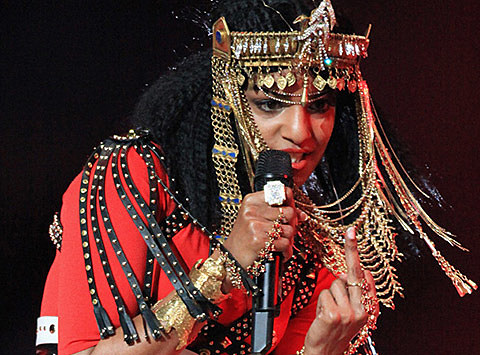 You may remember that the NFL was seeking a $1.5 million fine from M.I.A. for the "offensive gesture" (flippin' the bird) she let fly during the 2012 Super Bowl Halftime show. The Hollywood Reporter reports today that the National Football League is not only still seeking that fine, but also an additional $15.1 million in compensatory damages -- the alleged value of the public exposure she received for the two minutes she was on television.

M.I.A. and her lawyer filed a complaint, basically saying it's hogwash:

The singer says there can't be liability or damage based on speculative FCC action, and her legal papers say it is "implausible" that any indecency fine will come after years of regulatory inaction and recent decisions at the U.S. Supreme Court.

What's more, the responsibility of broadcaster NBC could be investigated as the arbitration continues forward.

"NFL, and NBC, failed to exercise ordinary care in the conduct of the Halftime show by not activating the '5 second delay' system in place for the broadcast," says M.I.A.'s papers. "Any alleged fault or liability of Respondents should be diminished by NBC's dereliction. Discovery has not been taken yet to determine whether contractually NBC owed a duty to NFL to properly operate the delay system. Very likely that is indeed the case." - [THR]

You can read the whole complaint over at The Hollywood Reporter.