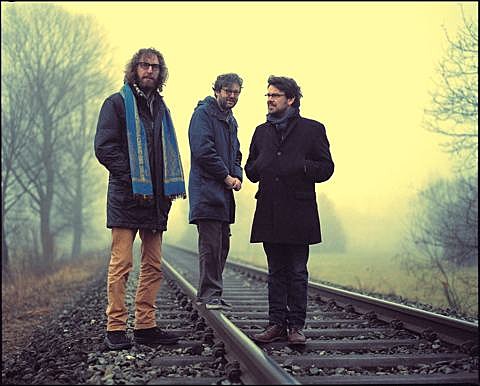 The Notwist will soon release Close to the Glass, the German band's first album in five years. It's out on February 25 via Sub Pop. Their MO hasn't changed so much since 2008 (or 2002 when the great Neon Golden was released), as the new album melts glitchy electronics and krauty indie rock together. The band are still capable of unleashing affecting pop songs as well, like "Kong" which is very much in the "Pilot" mold. You can stream that, watch its video, and check out another tracks from the album below, and the LP is up for pre-order in a double-vinyl edition with one platter orange and the other platter blue (to match the album art), with side 4 being an etching.

While there hasn't been a full tour announcement yet, The Notwist will be in North America for dates this summer, including the 2014 Sasquatch Festival in Gorge, WA, and NYC at Webster Hall on June 9. Tickets for Webster Hall go on sale Friday (2/14) at noon with an AmEx presale starting Wednesday (2/12) at noon.

UPDATE: Tour announced, all known North American dates are listed, along with the song streams and the "Kong" video, below...