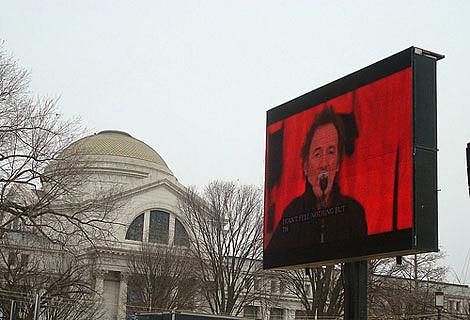 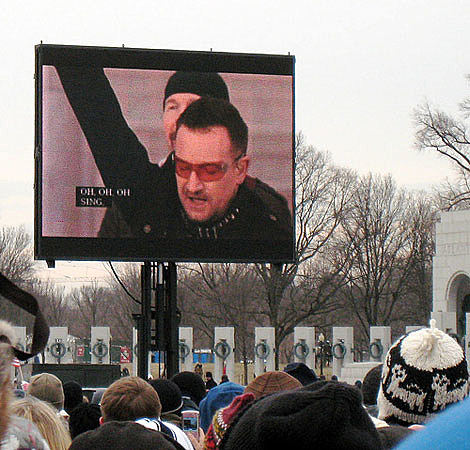 United in their desire to witness a historic moment, hundreds of thousands of people of all ages and races gathered under the marble gaze of former President Abraham Lincoln.

"It's a chance to be part of living history," said Audrey Lewis, from Virginia, as she waited for President-elect Barack Obama's welcome concert in Washington to begin.

Volunteers manning the entrances said spectators had begun arriving at the National Mall soon after 0600, willing to wait for hours to get the best view possible of Mr Obama, less than 48 hours before his inauguration. They thronged along the sides of the Reflecting Pool leading up to the Lincoln Memorial, where, four decades ago, so many massed to hear the words of Martin Luther King.

The significance of the moment seemed lost on no-one and - despite the line-up of celebrities, Stevie Wonder, Usher, U2's Bono, Bruce Springsteen and Beyonce among them - there was no doubt who was the day's real star.

The loudest cheers of the afternoon rang out first when Mr Obama and his family came down the memorial's steps to the stage, and again when he stepped forward to address the crowds.

"In the course of our history, only a handful of generations have been asked to confront challenges as serious as the ones we face right now," he said. "Our nation is at war. Our economy is in crisis."... [BBC]

HBO is streaming the whole thing one more time at 11:30PM ET/PT tonight/Sunday.

U2 In Obama Concert