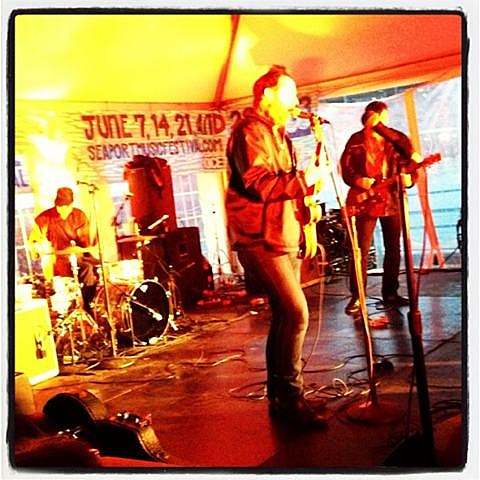 Last Friday (6/7) was the kickoff show of the 2013 Seaport Music Festival with a Memphis double shot featuring vets The Oblivians (who just put out their first new LP in 15 years) and newcomers Ex Cult. As you may remember if you went outside or looked out the window, Friday's weather was cold and torrential and not generally condusive to outdoor shows. Luckily, the Seaport Folks were proactive and moved it to the nearby Beekman Beer Garden under its large tented area. Despite the cruddy weather, Beekman was packed for the show and both bands put on a good show.

The Oblivians will be back in the NYC area on August 16 at The Bell House and tickets for that show are on sale now.

As mentioned, Oblivians frontman Greg Cartwright will be back at the Seaport with his other band, Reigning Sound, for the free 4Knots Festival on June 29. The next day (6/30), Reigning Sound will play Maxwell's. Tickets for the Maxwell's show are on sale now. You're running out of chances to visit Maxwell's, as the legendary Hoboken, NJ venue will close at the end of July.