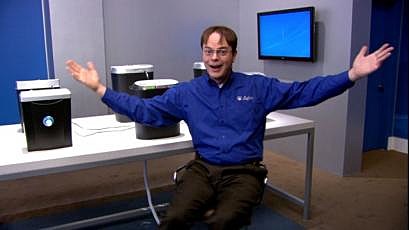 It's time to take a last nostalgic look at Jim, Pam and Dwight and their quotidian struggles and successes at the Scranton branch of the Dunder Mifflin paper company as they've been documented on "The Office." When that NBC comedy begins its ninth season on Sept. 20, it will be the final season of the series, its executive producer Greg Daniels said on Tuesday.

Speaking of things on NBC ending, it was recently announced that Abby Elliot is not returning to SNL which also recently lost Andy Samberg and Kristen Wiig. The NY Times says:

Producers at "Saturday Night Live" are continuing to audition new cast members for the show, which begins its 38th season on Sept. 15. NBC will also broadcast two prime-time "Weekend Update" specials on Sept. 20 and Sept. 27.

The article implies Jason Sudeikis may ready to leave as well. The musical guest for September 15 is still TBA.