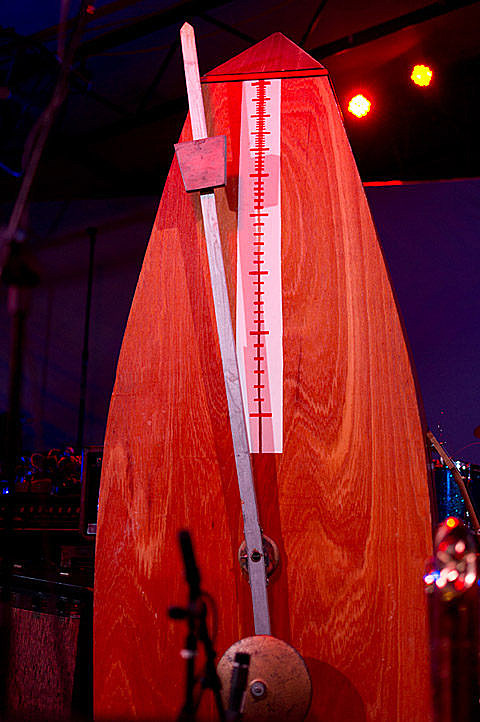 Given the number of reunion tours that have come through over the past few years, it can be hard to keep track of just who's together and who's defunct for good. When I told a friend what bands I went to see at Le Poisson Rouge last night (9/21), his eyebrows wrinkled in confusion. "I thought they stopped playing like ten years ago," he said. And well, they kind of did. [editor's note: he needs to read more websites!] But after a lengthy hiatus, The Olivia Tremor Control joined forces with fellow Elephant 6 Collective artist The Music Tapes to tour once again.

In keeping with the zany, experimental vibe the collective is known for, Julian Koster the front man of The Music Tapes (and also a member of The Olivia Tremor Control) began the set with something of a "gypsy circus" tune that featured mechanized organ samples and Koster on the magical singing saw.

Koster explained the bizarre instrumental introduction by way of revealing a bit about his family's heritage. "My family comes from Romania, and I like to tell this story because it helps people understand what's about to happen," he joked. That Koster's matter-of-fact explanation soon gave way to fantastical legends and impossible feats only added to the music's whimsy.

As Koster, a master storyteller, spoke, he was joined on stage by his two bandmates... or should I say three? Towering over the three men, in the center of the stage, stood a seven-foot tall metronome that joined in on at least one song before its mechanical innards started to malfunction. ("Sorry, this has never happened before," said Koster.)

But the antics didn't stop at the tall tales and the imposing fourth band member. In addition to constantly shuffling through an array of instruments/props (including a banjo Koster played with a violin bow), the three men jumped off stage at one point and marched through the crowd, chanting and playing makeshift versions of their instruments. Considering the speed with which indie bands seem to fizz and fade these days, it's nice to see a group that has not only maintained its distinct sound, but also added to it over the years.

After a short intermission, eight men crowded onto the stage. As if making up for the years of silence, The Olivia Tremor Control put on a particularly raucous show from the very first song, leaving ample time for noisy instrumental interludes and lyrical yelling.

Their set was a mix of short 2-3 minute pop songs and longer, more free form suites, like "Green Typewriters." Old songs and new (like "The Game You Play Is In Your Head, Parts 1, 2, & 3") blended surprisingly well, and each elicited cheers from the undiscriminating audience.

Were they as tight as they were in the early '90s? Hard to say since I didn't exactly make the 18+ cut-off for shows back then. But there was definitely something powerful contained in the crazy, hectic mess of instruments and multi-part harmonies - a kind of energy and fervor rarely seen these days even in the nostalgia circuit. Last night's show may not have sold out (it came close), but the dark, underground room was still packed with adoring fans who still knew every word of their songs - even after all those years.

Miss last night's show? Stream it in its entirety, courtesy of NPR Music. TOTC selist below...

--
The Olivia Tremor Control Setlist
A Peculiar Noise Called "Train Director"
I'm Not Feeling Human
Memories of Jacqueline 1906/The Giant Day (Dusk)
Courtyard
Define a Transparent Dream
A Place We Have Been To
The Game You Play Is In Your Head, Parts 1,2, & 3
Jumping Fences
Grass Canons
California Demise 3
Green Typewriters (suite)
NYC-25
Paranormal Echoes
I Have Been Floated
Marking Time
A Sleepy Company
Mystery
Hideaway
The Sylvan Screen