The Orb @ Hammerstein Ballroom 1997 (click HERE for a bigger flyer) 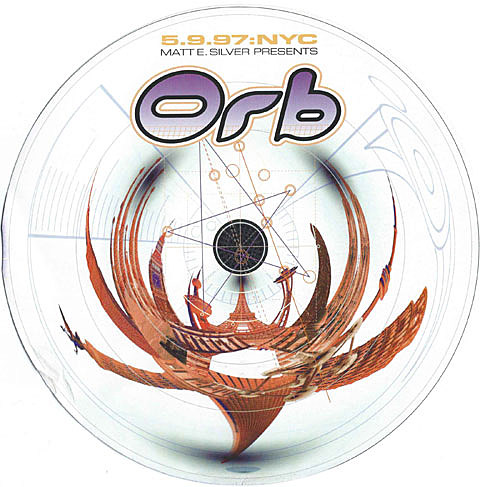 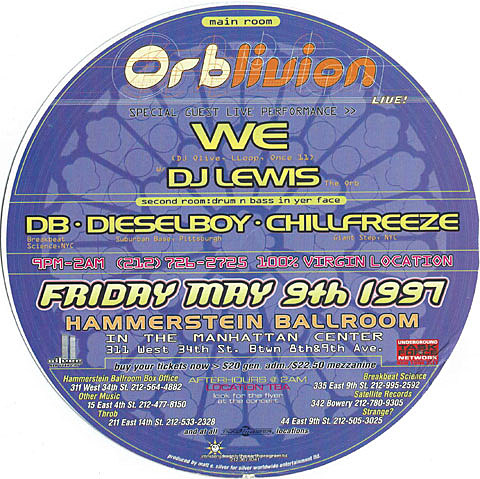 Back in '97, way before "EDM" was a thing, but when NYC rave culture had already gotten what seemed back then a bit too popular, rave music heroes The Orb (never lame) came to town for a show in support of Orblivion. The Hammerstein Ballroom show flyer (fliers were still important back then), which I just scanned in honor of The Orb returning to NYC this week, resembled a rave flyer and the rave elements of the show definitely helped to ensure a venue that big was not too big.

The event was produced by rave music producer Matt E. Silver. Raving meant staying out late, and for Hammerstein Ballroom, 2am was pretty late. For those wanting more, the afterparty location would be revealed via a flyer at the concert. "Drum n Bass" was already an established thing and the 2nd room at Hammerstein was rounded out with three DJs including NASA co-founder DB, Dieselboy from Pittsburgh and Giant Step DJ Chillfreeze. Tickets were available at the Hammerstein box office, Other Music, Throb (RIP), Breakbeat Science (RIP), Satellite Records (RIP unless you count their website and EDM rebranding), and Strange? (RIP), not to mention "all Ticketmaster locations". There isn't a single ".com" on the flyer, nor a location to get tickets in Brooklyn.

Rolling Stone was at that show:

With a level of sensory overload that evoked Pink Floyd, a constant stream of psychedelic images was projected onto the screens about the stage, including morphing faces, ubiquitous alien references, Bela Lugosi, panda bears and a red chair flying through a futuristic cityscape. Musically, the beat-driven soundscapes were interlaced with a frenetic procession of quirky musical details and punctuated by ambient pauses, as though to pace the level of absorption. At one point, mellow dub hooks transformed into watery splishes; seconds later, the room was filled with chattering electronic birds.

Paterson and Hughes also dropped in various snippets of speech, from bits of conversation, to weather reports, to a hilarious poem by a man with an English accent about his regret at not being Italian. Also mixed in throughout were what sounded like McCarthy-era speeches declaiming the sanctity of God and country. Layered amid music without a fixed narrative and offered up to an audience to whom that time is ancient history, it amounted to an odd nostalgia for a fixed world order, as well as a cool acknowledgment that such order is now impossible.

While the sensory onslaught of an Orb performance practically forces a fairly passive relationship to onstage events, the opening DJ duo, We, gave concert-goers the sonic space to interpret sounds for themselves. With a sweet but gritty sound that seemed to get into people's bones, We's music was at once primal and futuristic, embryonic and worldly. Although the group, which consists of DJ Olive and DJ Loop, usually performs in smaller venues, they managed to retain the intimate quality that makes their occasionally jackhammer-like sounds somehow transmit a grinding warmth.

The Orb are on tour play slightly smaller venue Highline Ballroom in NYC tonight (4/22) with Blondes, and then even somewhat more intimate Brooklyn Bowl at midnight on Friday. Tickets are still available for both at the links.

A full stream of "Orblivion", via Spotify, below...