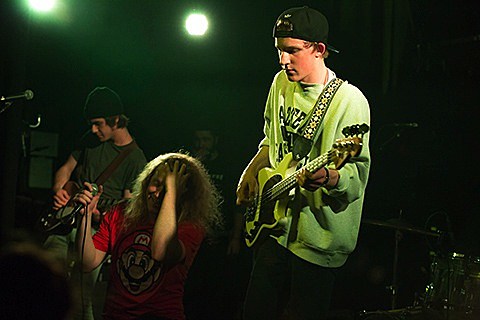 The Orwells get shut down: So many people packed in to see the Illinois rock band at the Miller Lite's New Music on Tap Lounge that about 20 kids climbed onto the top of the tent in hopes of getting a better view. Security stopped the show to get them down, prompting chants of "(Expletive) Miller Lite!" Once the show restarted, the crowd surged against the barricades, forcing security to cut the power again and end the set. [USA Today at BONNAROO]

Chicago's The Orwells have been on a roll lately. They released their new album Disgraceland on June 6, which they followed up by playing two NYC shows in one day on June 9, including an in-store performance at Rough Trade and a sweaty and rowdy BV-presented late show at Shea Stadium with Shark?. The next day they appeared on "The Late Show with David Letterman" AGAIN (their first appearance was a notable one), and then capped off their week by appearing at Bonnaroo last weekend (see review of their short set above).

They'll play their third free Chicago show in a row tomorrow (6/19) at Schubas before heading out on tour in August and September with Skaters. As mentioned, that tour brings them back to NYC for a date on October 15 at Irving Plaza, They also play October 17 at Asbury Lanes in Asbury Park. All dates are all listed, along with video from Bonnaroo, Shea Stadium and Letterman, below...