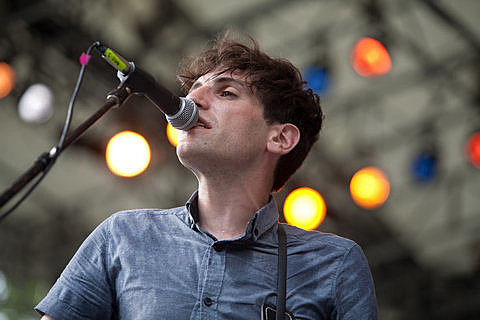 While The Pains of Being Pure at Heart didn't release an album this year, they have stayed busy touring on the heels of last year's terrific Belong. (They did put out a covers 7" in the UK though which is worth seeking out.) The band play a free hometown show this Friday (12/14) at Brooklyn Night Bazaar with Black Marble, Habibi and Heavens Gate. Doors are at 6 PM with bands starting at 8 PM, and it's all ages. Lines to get in Brooklyn Night Bazaar have been long, but move pretty quickly.

In other TPOBPAH news, singer/guitarist Kip Berman is one of the conspirators behind "Rough Smooch" a new indiepop party that has its debut this Sunday (12/16) at Williamsburg bar Legion. Wear your cutest anorak to this night that features performances by The Hairs, Kissing is a Crime and Grand Resort, plus Kip and WNYU's Maria Sherman on DJ duty. The party is free and starts at 9PM.

And lastly, the Pains were kind enough to send us a year-end music list. The whole band are music obsessives and couldn't whittle the list down to ten, so they sent a list of "some music we thought was cool in 2012." Kip adds, "I'm certain the other PAINS would put Kurt's Ice Choir record Afar on our list, but I think it would make him feel weird and, perhaps, seem nepotistic. But his record is really good, and however you feel about Pains, you should give it a listen." Ice Choir, by the way, play Cameo on December 22 with Cool Angels and Limited (info).

THE PAINS OF BEING PURE AT HEART
This is some music we thought was cool in 2012...